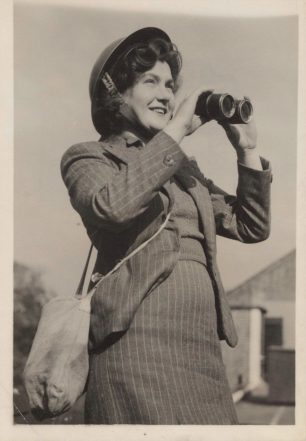 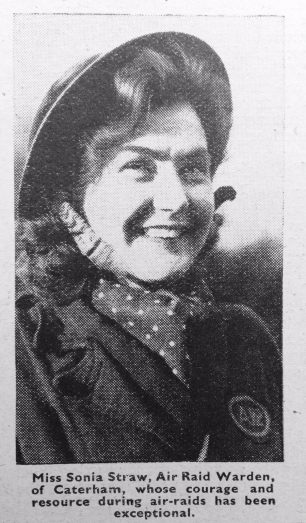 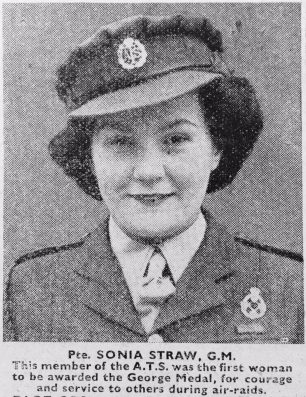 On 1st September, 1940, Sonia Carlile-Straw, a 19-year-old secretary from Caterham, manned an ARP post alone and took care of shocked and wounded casualties for 13 hours un-aided. She had no practical experience of First Aid, but stayed calm and used her own common sense and resourcefulness.

For her efforts she became one of the first civilians to be awarded the new George Medal.

It’s no wonder she had to wait so long for assistance – RAF Kenley was targeted  on 1st September and Biggin Hill suffered its sixth raid in two days! Women were proving their worth there too: three Biggin Hill WAAFs were awarded Military Medals for their courage. Local ambulance and rescue services were struggling to cope with the onslaught, leaving wardens like Sonia to cope as best they could.

Her story was quite widely reported at the time and she appears briefly in this British Pathe newsreel.

The citation for her George medal reads as follows:

Miss Sonia Vera Carlyle Straw, Warden, Caterham. During an air raid Miss Straw volunteered to give assistance to the wounded. While the raid was in progress she attended a number of cases of badly injured women and children and treated several persons suffering from shock. She carried on entirely by herself without assistance for a considerable time until help came. Her action was most praiseworthy throughout and she showed great courage and resource.

Sonia lived in St. Michael’s Rd, Caterham and was the daughter of a Grenadier guardsman. Her brother was also in the army. At the time she was working as a shorthand typist in a solicitor’s office and hadn’t completed her ARP training. She became one of the first three women to be awarded the new George Medal – the other two being Mrs. Dorothy Clarke and Mrs. Jane Bessie Hepburn, ambulance workers from Aldeburgh, Suffolk.

I came across several people lying badly injured. With whatever I could find, I bandaged them up. I used to think I would be scared at the sight of blood, but all those feelings leave you when you see pain and distress.  Three soldiers brought water and bandages for me, and I soon had all the injured fairly comfortable. They were mainly women and children. After I had finished someone telephoned to say they could not trace their mother, who had been in the bombed part of a flat. With another warden, I helped search for her until after midnight. When we found her she was dead under a bed.

Looking at the civilian casualties from this period, there are two incidents that might be candidates for the one Sonia was dealing with:

May they all rest in peace.

At the time, Sonia said:

I did no more than anyone else would have done.