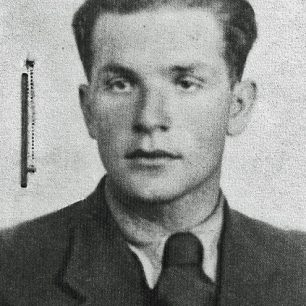 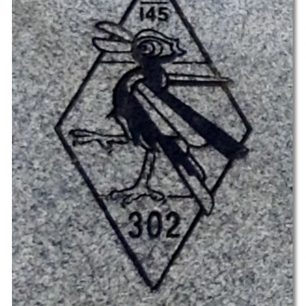 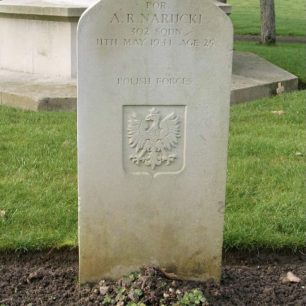 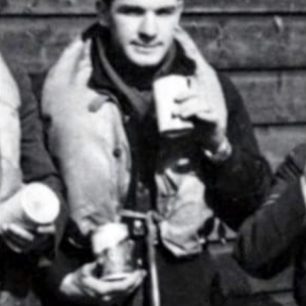 Aleksander Narucki
From the collection of Jaroslaw Gwardys, source unknown.

Aleksander Narucki’s life before he arrived in Britain from France on 16 July 1940 remains pretty much a mystery. All that is known is that he was born in Orenburg on the Ural River on 1 January 1916.

Given that Orenburg is over 900 miles south east of Moscow it is remarkable he came to serve in the Polish Air Force. Orenburg’s claim to fame is as the birthplace of Yuri Gagarin. Narucki must have served in the pre-war Polish Air Force given that he arrived in Britain from France three weeks after the cessation of hostilities there.

After spending time with the Polish School of Technical Training and the Polish holding Depot, Narucki was posted to 1 School Army Co-operation at RAF Old Sarum on 5 September, 1940 to join 6th Polish Pilots Course. This unit flew mainly Hectors, Lysanders and Ansons in the tactical reconnaissance role for the army although they were not really suited to the role. After less than two weeks at Old Sarum, Narucki joined No.5 Operational Training Unit (OTU) at RAF Aston Down for his conversion training to the Hurricane.

The height of the Battle of Britain, and probably his experience as a pilot, led to another brief stay as he was posted to 615 Squadron at RAF Prestwick on 4 October 1940. Having been withdrawn from 11 Group at RAF Kenley at the end of August, 615 was now resting and recuperating plus training new pilots fresh from the Hurricane OTUs. Once again the situation in 11 Group intervened and 615 was ordered south on 9 October, this time to RAF Northolt.


Consequently, the twenty pilots under training with 615 were posted to 607 Squadron at RAF Tangmere, although the squadron arrived at RAF Turnhouse the following day. Narucki was one of twelve Polish pilots who made the move. After a comparatively long stay with 607, some four weeks, Aleksander Narucki was posted to 302 (Poznan) Squadron at RAF Northolt on 7 November.

Since arriving at Northolt on 13 October, 302 had seen regular action but had also suffered a string of losses both as a result of combat and returning from combat in poor weather. After a week of familiarisation with the squadron, Narucki joined a patrol covering Biggin Hill on 14 November. It was on this day that a 302 Squadron Hurricane flown by Group Captain Vincent, Station Commander at Northolt, was attacked and force-landed at Kenley. For the rest of the winter 1940-41, weather permitting, Narucki joined squadron patrols covering Mayfield, Tenterden, St Catherine’s Point, Shoreham, Spithead, Dungeness and Selsey Bill.

302 Squadron moved to the satellite airfield at RAF West Hampnett on 23 November 1940. On 8 March 1941, on a training flight, his Hurricane suffered engine failure and Narucki force-landed at Westbourne; he was back on a convoy patrol two days later. The squadron embarked on an over water patrol when they ventured to Cherbourg on 15 March. The routine of patrols continued for the rest of March and throughout April, after 7 April from RAF Kenley.

Tragically, Aleksander Narucki was killed on 11 May, 1941, when the squadron recovered to Kenley in poor weather at dusk. His Hurricane (Z3435) was struck by that flown by Pilot Officer Z. Wróblewski as they attempted to land. Wróblewski survived the incident. A similar tragedy had befallen 302 Squadron on 18 October 1940 when they lost pilots killed returning from a patrol in bad weather. One pliot got lost, ran out of fuel and crashed on Bluebell Hill near Maidstone, one crashed at Thames Ditton and the other two crashed on Kempton Park Racecourse.

Flying Officer Aleksander Ryszard Narucki is buried in Northwood Cemetery and is also commemorated on the Polish Air Force Memorial in Northolt, the inscriptions on it read:

To the Memory of Fallen Polish Airmen

I have fought a good fight, I have finished my course, I have kept the faith -IITIM.IV.7.-