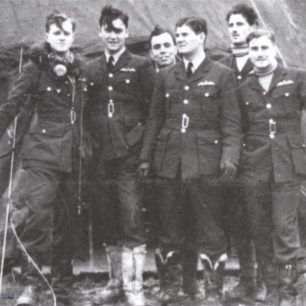 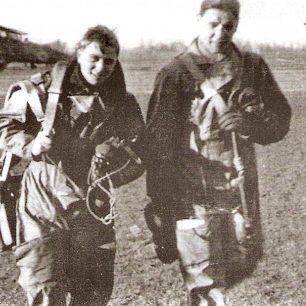 Richard Clare Whittaker on the right.
Society of Old Framlinghamians 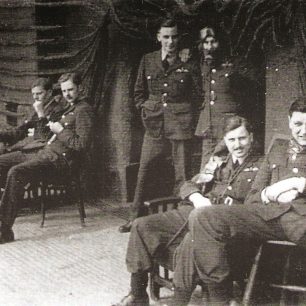 Richard Clare Whittaker on the right taken during the year before he was killed in action.
Society of Old Framlinghamians 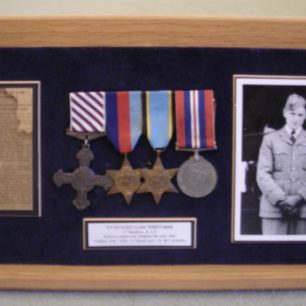 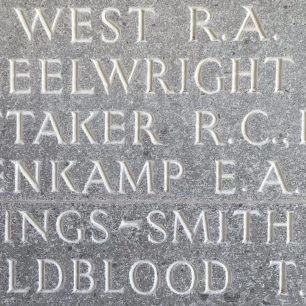 Richard Clare Whittaker was a Suffolk lad, born on 26 November 1919 in Yoxford.

After attending Framlingham College, between 1931 and 1937, he joined the RAF on a Short Service Commission in January 1938. As an Acting Pilot Officer, he was posted to No.17 Squadron, having completed his training with No.6 Flying Training School at RAF Netheravon, on 20 August 1938.

At the time 17 Squadron was in its fifth year at RAF Kenley and was flying the Gloster Gauntlet II. The squadron remained at Kenley until the following May when it moved to RAF North Weald where it began re-equipping with the Hawker Hurricane.

With tensions rising in Europe, the squadron moved to its War Station at Croydon Airport on 2 September 1939. Whittaker was part of “A” Flight and was given accommodation in the Aerodrome Hotel. The squadron encountered difficulties maintaining its second-hand Hurricanes at Croydon which, together with a limited number of trained pilots, affected the numbers it had at readiness.

As part of their war role, the squadron began night flying practice in the early hours of 8 September. As a result, the squadron suffered three accidents; one Hurricane crashed in the grounds of Purley War Memorial Hospital, another struck a searchlight on the airfield and Pilot Officer Whittaker “hit a tree with is undercarriage when taking off but did not do any damage.” 17 Squadron’s stay at Croydon ended abruptly that evening when they were ordered to move to RAF Debden by noon on 9 September.

Once at Debden Whittaker, along with the other pilots, began a series of training flights lasting to the end of October, during which time:

“A” Flight… managed to finish their co-operation exercise with the Wellingtons from Mildenhall. P/O Whittaker acted as liaison officer for the squadron in one of the Wellingtons.

17 Squadron was also tasked with providing a readiness flight at RAF Wattisham which Whittaker joined in November. On the down days at Deben, Whittaker continued with his training. The shuttling between Debden and Wattisham continued until mid-December when the squadron was detached to RAF Martlesham Heath as its forward operating location.

The new location brought patrols over the North Sea but no enemy aircraft were seen. The squadron was relieved to be able to return to Debden in time for Christmas, however, some pilots later felt the after effects of consuming oysters with their Christmas Dinner. The squadron returned to Martlesham Heath on 1 January 1940 for their next detachment. The routine now settled down to a week on detachment and a week at Debden, with 17 Squadron rotating with 504. The winter weather adversely affected the flying routine at the end of January and into February.

Spirits are high on 29 February, when the squadron headed en-masse to RAF Kemble to collect new Hurricanes. The new aircraft did not bring a new routine and Pilot Officer Whittaker continued with readiness duty at Martlesham Heath and flying practice at Debden until the beginning of May.

With the German invasion of Belgium and Holland, the squadron was ordered to patrol Ijmuiden. Whittaker formed part of “A” Flight which undertook the duty. The result was an uneventful two hour patrol. At 3.50 p.m. on 11 May, the squadron took off from Martlesham Heath to patrol The Hague and Rotterdam. Over Holland, “A” Flight headed for Rotterdam, where they were engaged by about sixteen Me.109s, in the ensuing combat they claimed three of the enemy:

F/O Whittaker, Yellow two states: “A little north of Rotterdam the whole Flight was suddenly attacked by about sixteen Me.109’s in all, eight coming in for the first attack. Afterwards a dog-fight developed and I broke away and saw three Me.109’s on the tail of a Hurricane. I did a quarter attack on his port giving a short burst, but had to carry on past him. I then saw another Me.109 and we circled each other feinting for position and I finally got on his tail. We had both been flying at very low speeds trying to turn inside one another. At this point I commenced to stall and lost sight of the enemy aircraft temporarily. On coming out of the incipient stall, I saw a parachute descending where the enemy aircraft had been in the sky. I saw still another Me.109 about to attack me so I broke away and flew through the smoke which was over the Hague and Rotterdam out to the coast. The Hague as a whole was on fire. I then set course for home.

Overall, the squadron lost five pilots during the patrol, two killed, one wounded and two prisoners of war. Whittaker returned to Martlesham Heath at 6.08pm. The next day the Squadron diary reports “…the pilots are feeling a trifle sober”. The next few days were quiet and no contact was made with the enemy.

On 17 May, the squadron was ordered to proceed to Hawkinge, after changing radio sets at Debden. From Hawkinge the squadron flew to Merville and from there launched a patrol to the Brussels area. Whittaker, in “A” Flight, was detailed to patrol north-east of the city; they sighted twenty-four Ju.87s and attacked. In the engagement they claimed three of the dive-bombers but lost two pilots, including their squadron leader who crash landed after stalling his Hurricane. The next day, the squadron again flew from Hawkinge this time to Merville. In the afternoon, they took off to intercept a Do.215 and two Me.110s near Seclin. In the engagement they downed the Dornier and damaged one of the Me.110s. After returning to Lille, an air raid warning hastened their return to Hawkinge. The take off was chaotic and most of the squadron made their way home individually. Again, on 19 May, the squadron took off for France and in the afternoon they carried out a patrol between Cambrai and Bavai. They encountered a number of Me.109s claiming four as shot down and two damaged:

..to carry out an offensive patrol of Cambrai, Valenciennes, Le Cateau and Bavai…P/O Whittaker attacked a Do.215 at 8,000 feet he carried out a K No.1 attack. Enemy aircraft was seen to go down by F/O Adye.

However, the squadron lost another two pilots, with one of them killed. After three days of combat, 20 May was quiet with just an uneventful bomber escort mission to occupy the squadron.

P/O Bird-Wilson and P/O Whittaker failed to return at first and we were almost afraid that they were lost when they returned an hour later having refuelled at Le Havre and le Touquet respectively.

That evening the squadron returned to Debden where, over the next two days, armour plating for the pilots was fitted and the VHF radios were reinstalled. On 24 May, the squadron was attached to RAF Kenley.

The next day was a busy one for the squadron and Pilot Officer Whittaker. After an early morning bomber escort mission, the squadron formed parted of a three squadron patrol from Hawkinge to Gravelines. They encountered various enemy aircraft around Calais and claimed five shot down; one of the successful pilots was Richard Whittaker. With the situation worsening on the Continent, the high tempo of operations continued. On 26 May, returning from another early morning patrol, the squadron was bounced by six Me.109s, they claimed two “disabled”. The squadron also encountered German bombers but did not make a claim. The squadron again lost a pilot killed and could only raise nine Hurricanes for the afternoon patrol from Hawkinge. They were joined by six aircraft from 79 Squadron to patrol Calais and Dunkirk. Returning from the patrol they were again bounced by Me.109s, losing Flight Lieutenant Adye in the attack. Pilot Officer Whittaker exacted some retribution by shooting down Adye’s victor.

With limited numbers of Hurricanes available, the squadron was only able to launch half-strength missions over the next two days – it is unclear if Whittaker participated.

With nine aircraft available, Whittaker joined the squadron as it deployed forward to Hawkinge on 29 May. The resulting morning patrol from there was uneventful. On the lunchtime patrol, in company with 245 Squadron, they encountered a formation of Do.215s near Dunkirk. In the engagement the squadron claimed two victories. The escorting Me.110s were by now wary of tangling with single-engine fighters and did not engage. However, 17 Squadron attacked them and claimed one victory. Pilot Officer Whittaker contributed to this claim.

On 1 June, while patrolling over Dunkirk, the squadron engaged Ju.88s dive bombing shipping off the port, Whittaker and his colleagues claimed two bombers as damaged. Whittaker tried to engage a lone Me.109, escorting Ju.87s, on 3 June, but was unable to get close enough to cause any damage. The squadron lost another pilot on this patrol. Due to fog over Hawkinge, Whittaker was forced to return direct to Kenley. 4 and 5 June brought four uneventful patrols for 17 Squadron. The morning patrol on 6 June, saw the squadron escorting Blenheims in a raid on Abbeville when they were attacked by three Me.109s. Although the squadron claimed one victory and the other two as damaged, they lost another pilot in the engagement.

According to the No.17 Squadron Operations Record Book, at lunchtime on 7th June*, the squadron took off in company with 111 Squadron to patrol Le Treport – Aumale. On sighting a handful of Do215s the squadron engaged but were unsuccessful with their attack. However, they lost their new commanding Officer Squadron Leader G. D. Emms as they attacked. The squadron formation had been broken up in the attack and 17 Squadron’s Hurricanes were separated:

P/O K. Manger encountered two Me.109s N.E. of Airaines, at 3.000 feet attacking a Hurricane, the pilot of which he thought to be P/O R C Whittaker. P/O K. Manger attacked and by deflection shooting drove off one, and sent the other down in flames. P/O R.C. Whittaker was not seen again.

In his Combat Report, Pilot Officer Manger said he saw the Hurricane “turn away and dive toward the ground” as he made his attack. Unfortunately, no trace of Pilot Officer Whittaker or his Hurricane was found.

Richard Whittaker was posthumously awarded the Distinguished flying Cross on 25 June 1940. Part of the citation read:

By his fine air tactics and marksmanship he has destroyed four enemy aircraft and severely damaged at least four others.

Richard’s younger brother, Glyn Bateman Whittaker, followed in his brothers footsteps with schooling at Framlingham College before joining the services. He was killed as a Lieutenant with 47 Royal Marine Commando, in Normandy, on 28 June 1944. Both brothers were twenty years old when they died.

His medal collection is now on display in the Headmaster’s Study at Framlingham College.

Nb. The No.17 and No.111 Squadron Operations Record Books state that Emms and Whittaker’s fatal sortie took place on 7th June, 1940, whereas the Commonwealth War Graves Commission have the date of their deaths as 06/06/1940. We hope to clarify this when further source material becomes available.

Sources: Bruce Barrymore Halpenny: Action Stations 8. Chris Ashworth: Action Stations 9. The National Archives. Ancestry.co.uk London Gazette. Many thanks to Chris Essex at The Society of Old Framlinghamanians and Aircrewremembered.com for the photos (please see links below).