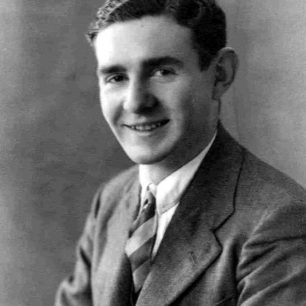 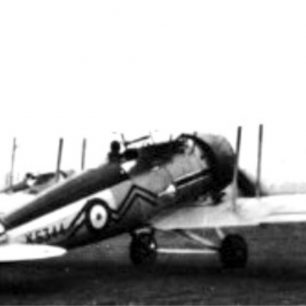 Gloster Gauntlet K5344 - one of the aircraft involved in the collision, though which pilot was flying it remains unknown. 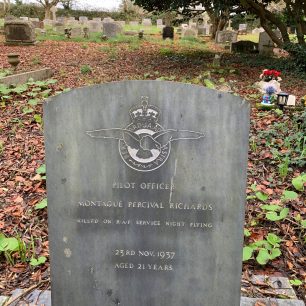 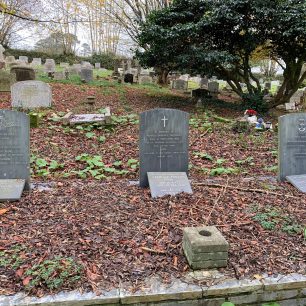 The family plot at St. Mewan's churchyard, with the grave of Captain Phillips DFC on the left, P/O Montague P. Richards on the right and Monty's parents in the middle, together with Reginald Phillips Dyer, Monty's half brother, who was washed overboard from his racing yacht, Flica, in heavy seas near Lyme Bay in 1949.
John Keast

On 23rd November, 1937, Pilot Officers Keith Victor Keen and Montague Percival Richards, of 17 squadron were killed when their Gloster Gauntlets (K5344 and K5348) collided at 6.45pm near Old Coulsdon. They were carrying out a night railway signals detection duty.

Flight controller that evening was Pilot Sergeant Robert Perry, who stated that at 6.30 pm he had seen an aircraft circling the aerodrome for about ten minutes before another plane appeared and tried to overtake it. They both headed off in a westerly direction and he observed their tail lights heading away into the distance. When they were about five miles away, one light wavered and disappeared. Perry assumed the aircraft had gone into a cloud, but then saw the light drop towards the earth and explode in a flash.

Charles Weston, of Newland’s Farm, Caterham, was at home when he heard a loud, heavy thud. Rushing to the window, he saw a streak of fire diving earthwards and explode on impact. This was about 400 yards from the Farm. Together with Joseph Gallagher, he rushed across the fields to the burning aircraft (K5344, Mercury engine 110959) only to find flames spreading along the front of the plane and Pilot Officer Richards slumped half in and half out of the cockpit. The straps holding Richards into the cockpit had already burnt through, so the men managed to pull Richards clear of the aircraft and smother the flames enveloping his body with his parachute and wet grass. However, their efforts were to little avail, as Richards made no movement.

Montague Percival Richards was born 18th June, 1916, in St. Austell, Cornwall. He was the only son of Francis Morley Richards and Kate Morley Richards (nee Phillips), but had two step-brothers from Kate’s previous marriage. Kate was an accomplished musician and was the organist at St. John’s Methodist church, St. Austell for many years.

‘Monty’ was educated at Dunheved College, Launceston, and Sevenoaks College Kent. He was a keen sportsman and played several games for St. Austell Hornets rugby club, as well as enjoying boxing, tennis and cricket.


His Father wanted him to join the medical profession, but Monty chose to join the RAF, inspired by his Uncle, Captain Percival Phillips, DFC, who had learnt to fly in 1916, had a distinguished flying record in WW1 and was one of the pilots in Alan Cobham’s Flying Circus, post-war.

Monty commenced his flying training in January 1936 at Prestwick, obtained his ‘wings’ on 25th August, 1936, and was posted to RAF Digby, Lincolnshire. For a short time he was attached to a bomber squadron, but was quickly transferred to fighters, being posted to No.17 Squadron at RAF Kenley in January 1937. He took part in the Hendon Air Pageant and ‘Black out tests’ at Brighton during his time at Kenley.

Pilot Officer Richards was laid to rest with full military honours in his home town of St. Austell at St. Mewan’s churchyard after a service at St. John’s Methodist church. His Uncle, Captain Percival Phillips DFC, who had inspired Monty to join the RAF, was one of the mourners. Tragically, he also lost his life in a flying accident at Gamlingay less than three months later.

Pilot Officer Richards was just 21 years old when he died.