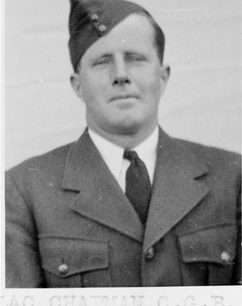 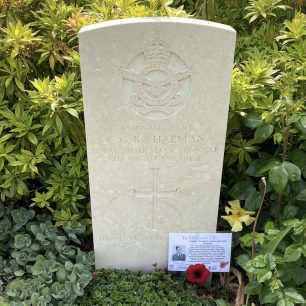 The grave of Sgt. Chapman. May 2022.
Jane Collman Williams 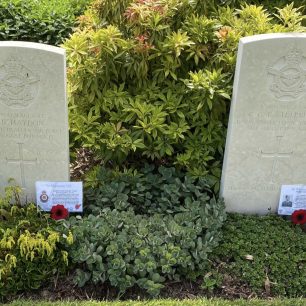 Haydon and Chapman buried side by side in Longuenesse (St. Omer) cemetery.
Jane Collman Williams

Christopher Geoffrey Blomfield Chapman, son of Christopher Charles and Catherina Chapman, hailed from Uralla in New South Wales and was born on 23 January 1913.

After completing his education at The Church of England Grammar School, Brisbane, in 1928, he worked as an overseer on his Father’s sheep property. He signed up for the Royal Australian Air Force (RAAF) on 28 March 1940 in Brisbane.

After less than 2 months training on the Spitfire, he joined 452 (RAAF) Squadron at RAF Kirton-in-Lindsey on 5 May 1941. Newly formed, on 8 April, 452 was the first Australian Fighter Squadron to be established in England, it would go on to become the most distinguished Australian fighter squadron. Initially equipped with Spitfire Is, the squadron quickly upgraded to the Mk.II in May. 452 suffered the temporary loss of its squadron commander, Squadron Leader R G Dutton DFC, when his Spitfire was damaged by that of Flight Lieutenannt “Paddy” Fincane’s whilst conducting an Air Drill display over Brighouse in Yorkshire. Dutton successfully force landed his aircraft although he was injured in the process, after returning from sick leave he was posted to command 19 Squadron.

The squadron’s first “state of readiness” was declared on 21 May and they were “fully day operational” on 2 June. For the rest of the month they practised dusk landings, stood at readiness and undertook convoy and dusk patrols.

Chapman first flew operationally with the squadron on 23 June, on a dusk patrol. This was followed by a convoy patrol on 25 June before he went on 8 days leave, returning on 5 July. Chapman then flew a further 8 times in the month, on various patrols, before the squadron moved south the Kenley on 21 July. He then flew regular operational sorties with the squadron until, on 9 August 1941, he went missing in an engagement with Me.109s on Circus 68, between Mardyck and Bethune, flying Spitfire IIA, P7590. Also missing on this operation were Pilot Officer J H O’Byrne and Sergeant G B Haydon. O’Byrne had also joined 452 on 5 May, but survived as a prisoner of War.

Christopher’s brother, Francis, also served in the RAAF. Whilst serving as a Wing Commander, he was killed on 8 March 1943, aged 31. He is commemorated on Panel 34 of the Rabaul Memorial in Papua New Guinea.