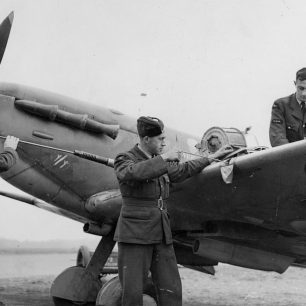 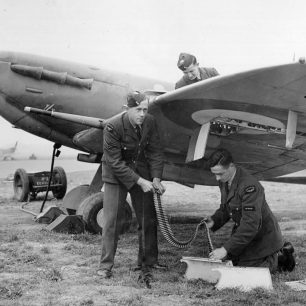 Seemingly ‘hard at work’ are Cpl. Muir, Cpl. Ernie Bongard, and LAC Hooper. However, closer inspection reveals that the canvas patches covering the machine-gun ports are undamaged, indicating that the guns haven’t been fired, and that, in all likelihood, there is no need to re-arm. So this is probably a posed photograph, but it’s great that the names of the ‘erks’ were recorded.

‘Silver Blue,’ (sponsored by Brigadier General Lindeman) was taken on strength by 485 Squadron on 23rd March, 1942. The Squadron left Kenley on 8th July, and, as the sources I can find say that these photos were taken at Kenley, it would be reasonable to assume that it was taken sometime between those dates. BM229 was flown on approximately 28 operational sorties while on strength with 485 Squadron.

Source: “Spitfire, The New Zealand Story” by Gerard Morris
Photos in the public domain from The Air Force Museum of New Zealand. See links below.