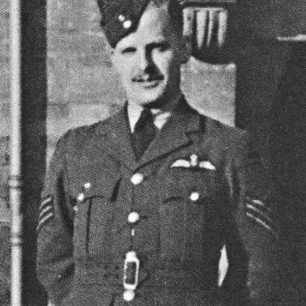 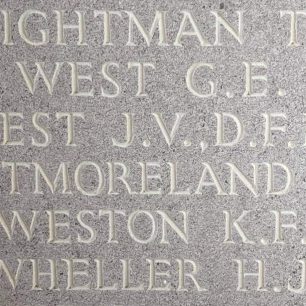 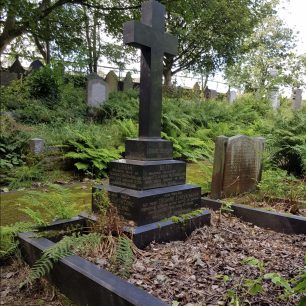 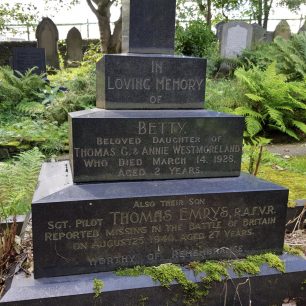 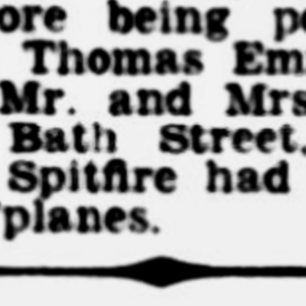 His Mother died when he was 8 years old, in early 1921, leaving his Father with four children to look after: Nancy, Thomas, William and Julie. Thomas Westmoreland senior re-married to Annie Robshaw in December 1921 and the couple had two more children, Ethel and Betty, who died aged two years old, in 1928.

After leaving school Thomas Emrys Westmoreland joined Metropolitan-Vickers as an apprentice in January 1934. Following the completion of his apprenticeship, in June 1938, he joined the staff of the Railway Signals Engineering Department.

Westmoreland had gained a civil pilot’s licence, funded by himself, on 5th January 1937, subsequently joining the RAFVR as a Sergeant on 8th May 1938.

He was called up on 1st September 1939 and on completion of his training at No.2 Flying Training School at Brize Norton, joined No.616 Squadron at Leconfield on 18 June 1940.

His first combat occurred on 15 August, when as part of “A” Flight he was scrambled to the east of Flamborough Head at 1 p.m. to meet an incoming raid. The enemy formation consisted of around 50 Ju.88s and  Me.110s. In the action that followed the squadron claimed 8 Ju.88s confirmed, 4 unconfirmed and 2 damaged, Westmoreland claimed one of those destroyed.


On 19 August, No.616 Squadron moved south to replace No.64 Squadron at Kenley, who made the reverse trip north to Leconfield.

On the evening of 25 August, the Squadron was scrambled, first to patrol Maidstone, then ordered to Canterbury to intercept raid of between 15 and 20 Do.17s with the same number of Me.109s as escort. The Squadron was bounced by the Me.109s and their formation broke up. In the ensuing dog-fight, the squadron claimed the destruction of a Do.17 and Me.109 with another Me.109 as a probable. Westmoreland was killed in this fight, however, neither his body nor his aircraft were found.

Westmoreland is commemorated on the Runnymede Memorial and the family grave in Wellhouse Methodist Graveyard, Kirklees, West Yorkshire.