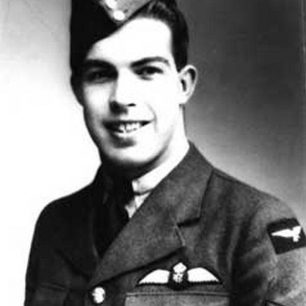 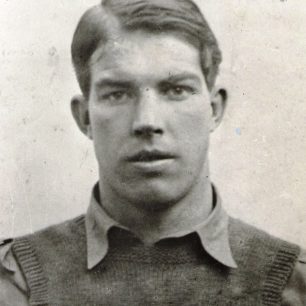 William's "escape photo." Pilots carried a photo of themselves wearing civilian clothes which could be used to forge identity documents if they were shot down over enemy territory and had to evade capture.
Crash in Bayeux by Francois Oxeant. 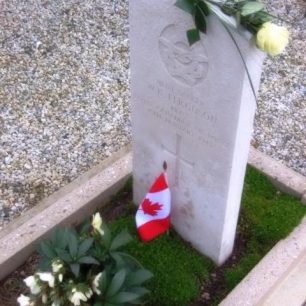 In 1994, the main street of St. Martin-Des-Entrees was re-named in Ferguson's honour.
Crash in Bayeux by Francois Oxeant. 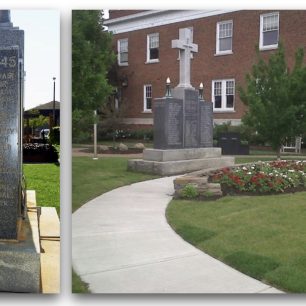 From the squadron Operations Record Book:

“Red 1 and 2 dove to attack [three locomotives] and Red 2 (P/O H. D. MacDonald) pulled out of the dive at 800ft and attacked and damaged an engine by cannon fire about five miles west of Bayeux. Red 1 (S/P W. K. Ferguson) was last seen still in a dive at about 1000ft from which it is thought he never pulled out. Flak was seen being fired from one machine-gun position on the roof of a factory, but it is not thought that S/P Ferguson was hit.”

SERGEANT PILOT WILLIAM KENNEDY FERGUSON was born in Peterborough, Ontario, on the 29th February, 1920. He was the eldest of six children born to William Lauder Ferguson and his wife Mary Sophie Hannah Ferguson, and was a Presbyterian. His Father worked for a carpet company for some years and, in 1943, purchased Strathroy Woollen Mill from the Butler family.

“Bill” as he was known to family and friends, went to Grade school in Peterborough, Ontario, and continued his education at Peterborough Collegiate Institute. On leaving school, he worked as a receipt clerk for Mutual Life Assurance of Canada. He enlisted in the Prince of Wales Rangers (Peterborough Regiment) in August, 1940, and then volunteered for the RCAF on 1st March, 1941. When he enlisted in Toronto, he was described as pleasant, cheerful, serious, quiet and responsible. His papers also note that he had no flying experience at all – not even as a passenger!

‘Bill’ joined Course 33 at 20 Elementary Flight Training School at Oshawa, which commenced on 15th July, 1941, but it appears that flying didn’t come naturally to him. His instructor noted that he was troubled by sickness throughout his training, which put him behind; a situation which, it was felt, he had done little to rectify. He was judged to be a fair to average pilot, unsuitable for a commissioned rank, tending to be mentally dull and irresponsible. He did, however, succeed in obtaining his pilot’s badge on 19th December 1941 and didn’t have to wait long before being sent overseas to England, where he was initially sent to 52 Operational Training Unit, before spending a couple of weeks with 504 squadron.

On the 18th June, 1942, he was posted to 401 squadron at Gravesend. They were stationed at Lympne and Biggin Hill before arriving at Kenley on 23rd September, 1942.

Ferguson’s Spitfire IX (EN183, coded YO-V) crashed at St. Martin-Des-Entrees, on 15th January, 1943, after he failed to recover from a dive while attacking locomotives. It seems likely that he was hit by flak. His body was buried by order of the German authorities, on January 18th in the civilian cemetery, at St. Germain, Normandy. A large crowd of French citizens gathered to pay their respects and lay flowers on the grave – an act which was seen as a provocation by the Germans and resulted in the confiscation of the identity papers of all those civilians present.
A month later, a dozen of them, suspected of being members of the Resistance, were arrested and sent to concentration camps in Germany. Some of them were High School students who were taken from their classrooms. Four never returned.

Coincidentally, on the day that Bill was being laid to rest in France, his Commanding Officer, Squadron Leader Hodson, wrote to Ferguson’s Mother:

Your son was very popular with this Squadron and was fast becoming one of our best pilots. His cheery personality is greatly missed in the Sergeant’s Mess and his loss is regretted by all. “Fergie” was quietly efficient in his work and never complained when asked to do extra ground duties.

From the start, it appears that Bill’s Father had difficulties accepting that his son might be dead. On the 1st May, 1943, he surmised, in a letter to the RCAF, that as no smoke or fire had been observed following the crash, his son might be seriously injured in an enemy hospital or being “hidden by peasants.”
In February 1944, he writes again, saying, “I have a feeling my son….is still living, and am quite satisfied to wait until we re-occupy France for more definite information.”
In June, he “interviewed” P/O Dean MacDonald, who witnessed Bill’s crash, when he returned to Canada. A photo found on the body of the “unknown” pilot was identified as being of William Ferguson, but Bill’s Father still seemed unable to accept this as evidence of his son’s death.
The last letter to the RCAF came from Bill’s Mother, on the 17th February, 1946. In it she thanks the Air Force for their kind expressions of sympathy and says:

I only hope all our fine boys have not died in vain and peace will reign again for all time.

S/P William Kennedy Ferguson was posthumously commissioned and promoted to Pilot Officer.
In 1994, the French town where he crashed re-named their main street was re-named in his honour.

Many thanks to Francois Oxeant for his assistance and permission to use photos of William Ferguson and his grave.