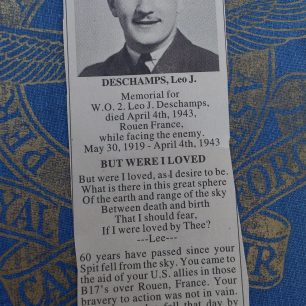 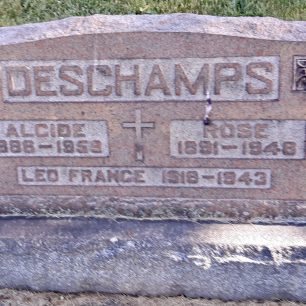 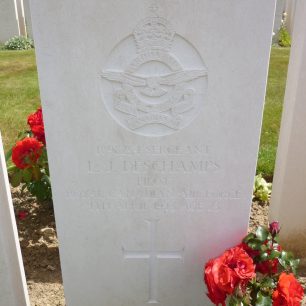 On 4th April 1943, 403 squadron were in action escorting Flying Fortresses returning from bombing the Renault factory at Billancourt, Paris.

The bombers were already under attack by FW190’s when 403’s Spitfires made the rendezvous, and a fierce dogfight ensued. Although our Canadian pilots claimed five FW190’s destroyed and one damaged, two of their men didn’t make it home: P/O E. L. Gimbel DFC who was wounded but evaded capture, and Sgt. Leo Joseph Deschamps….

SGT. LEO JOSEPH DESCHAMPS was the sixth of fourteen children born to Alcide and Rose Deschamps of Windsor Ontario and was commonly called ‘Lee’. At the time of his death he was engaged to a girl named Ethel Pool.

He was the first of his family to complete High School and he studied bookkeeping before getting a job at Woolworths and then the Ford Motor Company. Four of his brothers also served in the Armed Forces during WW2.

Lee enlisted in the RCAF on 5th May 1941, completed his training and was sent to Britain in March 1942. He joined 403 squadron in October and served with that squadron until his death on 4th April 1943, during Ramrod 51.

Leo Deschamps was flying as No.2 to Flight Lieutenant Magwood, who attacked and destroyed a FW190. The pair climbed back up to 23,000ft and were able to close in on another FW190, which was destroyed by Deschamps.

Sadly, Deschamps failed to spot the two FW190s that attacked him from above and out of the sun. His Spitfire, BS120, was last seen by Magwood, skidding off to starboard streaming glycol.

Rest in Peace, Sgt. Deschamps and thank you for your service.

Leo was laid to rest in Dieppe Canadian War Cemetery and is also remembered on the RCAF Memorial, Jackson Park  and the RAF/RCAF Memorial in Dieppe Gardens, both in Windsor, Ontario.

Many thanks to John P. Sargeant and Larry Whitmore of the Canadian Aviation Museum.