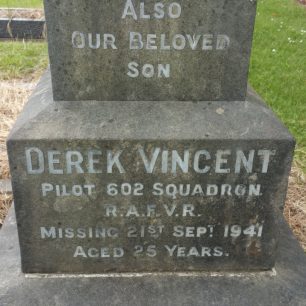 Although Derek Vincent Osborne has no known grave, he is remembered on his parents' grave marker at Sale Brooklands Cemetery.
EJ on findagrave. 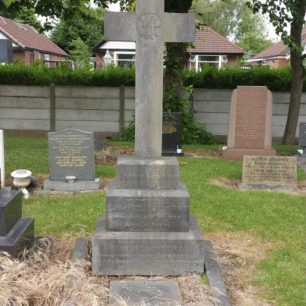 The grave of Sgt. Osborne's parents Samuel and Mary Christina, in Sale Brooklands Cemetery, plot V3296. Sgt. Osborne is remembered on the side of the stone.
EJ on findagrave 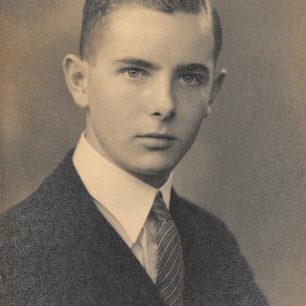 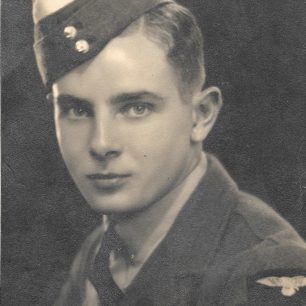 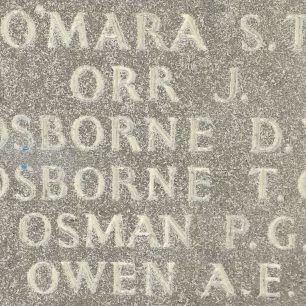 When Sergeant Derek Vincent Osborne was posted to 602 (City of Glasgow) Squadron, from 57 Operational Training Unit (OTU) at RAF Hawarden, they were based at RAF Ayr.


Ayr was a new fighter station having opened on 7 April 1941 and 602 Squadron were the first to take up residence when they arrived on 15 April. The squadron were joined by a film crew from 20th Century Fox four days later who spent the next ten days filming the activities of the squadron, although the Squadron did not feel they had been of much assistance. At the end of May 602 Squadron began to receive Spitfire Mk.IIs as replacement for their Mk.Is. Due to the quietness of the Sector, Sergeant Osborne was able to join convoy patrols on 11 and 12 June. Afterwards, the month remained quiet and Osborne only recorded two further patrols.

On 10 July, 602 Squadron flew their Spitfire Mk.IIs south to 11 Group and RAF Kenley, arriving around 21.30. They were declared operational immediately and performed their first operational mission on a bomber escort to Le Trait the next day. As a junior pilot with the squadron, Osborne did not make his operational debut from Kenley until 21 July,  when he joined an afternoon patrol; the bulk of the squadron had left earlier in the day to North Weald for a bomber escort mission to Lille on which they lost flight Lieutenant T G F Ritchie. Sergeant Osborne took part in both squadron missions on 24 July when they operated from Merston; firstly escorting bombers to Cherbourg and then providing cover to a rescue boat heading towards Cherbourg. Poor weather limited squadron operations to “Rhubarbs” for the rest of the month.

However, the squadron received good news on 30 July, when the first nine Spitfire Mk.Vbs arrived. The ground-crews immediately began preparing the aircraft for operations, including the VHF radios and IFF sets. The re-equipment was urgently required because the Spitfire Mk.IIs were no longer effective against the latest mark of Me.109 being fielded by Luftwaffe Jagdgeschwader in northern France and Belgium.


On 2 August Flight Lieutenant A C “Al” Deere was promoted to Acting Squadron Leader and temporarily took charge of 602 Squadron. As the summer heightened, squadron operations intensified and Sergeant Osborne became a regular member of their missions. With their re-equipment ongoing throughout the month, the squadron often flew mixed formations of the two marks of Spitfire. Osborne performed his first operational sortie in a Mark V on 18 August as part of Circus 78 providing withdrawal cover for a raid on Hazebrouck. At this point the re-equipment appears to have been completed and Osborne flew the Mark V for the rest of his career. The rest of the month saw Osborne participate in several escort and patrol sorties.

Poor weather in the first week of September limited Osborne to two operational sorties. Despite an improvement in the weather, the second week only produced a convoy patrol and a “Rhubarb” for Osborne and, overall, squadron activity was very light. This quiet period ended on 17 September when the squadron, with Osborne, carried out two missions. Circus 96, to Marquise, in the afternoon saw them lose Pilot Officer A. R. Tidman who was one of several pilots attached from 123 Squadron for operational experience. Further Circus operations, to Rouen and Abbeville, followed on 18 and 20 September. The squadron lost Sergeants Squibb and Brown on the latter Circus.

21 September saw 602 Squadron launch eleven Spitfires as part of the high escort on Circus 101 to Gosnay. Led by Flight Lieutenant Williams, the squadron spotted a large formation of enemy aircraft above as they crossed the coast at Le Touquet but also three German aircraft below which Blue Section was ordered to attack.

The Wing was attacked by a large number of hostile aircraft on crossing the French Coast and a series of dog-fights took place.

The lower group of Me.109s was obviously the bait, the temptation of which was only partially resisted. One of these Me.109s was claimed as a “probable” but 602 Squadron lost Sergeant A. R. Hedger and Sergeant D. V. Osborne killed. Sgt. Bell baled out but managed to evade capture.

Derek Vincent Osborne was born in Lancashire, on 9 December 1915, to Samuel and Mary Christina Osborne. In 1939 he was recorded as a Manufacturers’ Agent for woollen goods and a member of the RAF Volunteer Reserve. Derek was an only child, and his mother never reconciled herself to the fact that he was lost in action with no known grave.

Sergeant Derek Vincent Osborne has no known grave and is commemorated on Panel 49 of the Runnymede Memorial.

Many thanks to Simon Burgess for the photos of Sgt. Osborne and additional information.