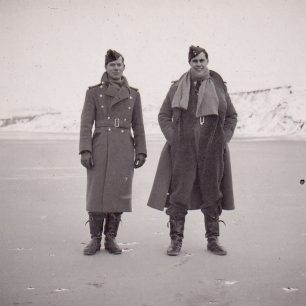 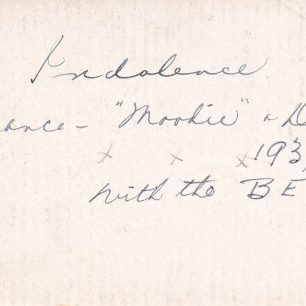 The reverse of the previous photo
©️Terry Horne 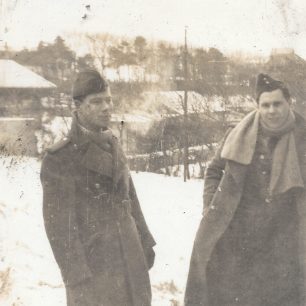 Another of Mudie with Horne in France during the freezing winter of 1939/40.
©️Terry Horne 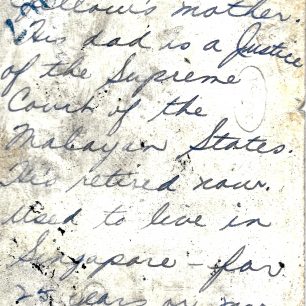 The reverse of the previous photo.
©️Terry Horne 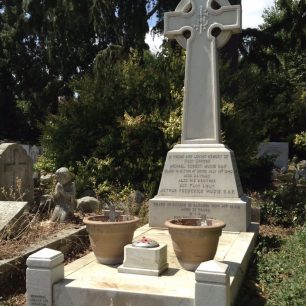 Michael Robert Mudie was born 26th February, 1916, in Singapore. His Father, Norman David Mudie, was born in Dundee and married Katherine Eleanor Pugh, from Chester, in 1911. The couple had four  sons, Norman, Richard, Michael and Arthur and were living in Chertsey in 1938. The two youngest boys would both sadly lose their lives serving in the RAF during WW2.

Michael Mudie studied at King’s College and joined the RAF on a short service commission in March 1939. On completion of his training he joined the 11 Group Pool in November of that year.

Following his conversion to Hurricanes, he became part of 2 Ferry Pilot Pool in December. 615 Squadron had left RAF Croydon for France on 15 November 1939, RAF Kenley was under reconstruction at this time, where Mudie subsequently joined them. The Squadron returned to RAF Kenley on 20 May 1940 where they would remain until the end of August.

During the early stages of the Battle of Britain, the Luftwaffe set out to draw Fighter command into battle by attacking British convoys in the English Channel; they described this phase as “Kanalkampf”. It was on 14 July that Pilot officer Mudie was shot down by Bf109s whilst defending a convoy off Dover. At the time he was flying Hurricane I L1584. Although badly wounded, he managed to bale out and was rescued by the Royal Navy and admitted to Dover Hospital. Unfortunately he died of his wounds the following day.

On 14 July, BBC commentator, Charles Gardner was reporting on the air combat from a vantage point on the cliffs outside Dover. He witnessed Mudie’s crash but mistakenly reported that it was a German aircraft.

Michael’s brother, Arthur Frederick Mudie, was killed only a few months after his brother when Bristol Blenheim L1389, of No.84 Squadron, crashed into mountains during operations against the Italians in Albania.
We are indebted to Terry Horne for permission to add his Father’s photos of P/O Mudie to this page.