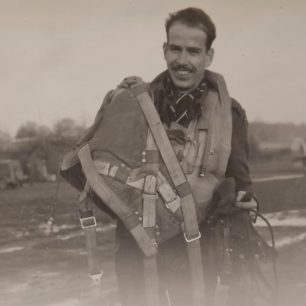 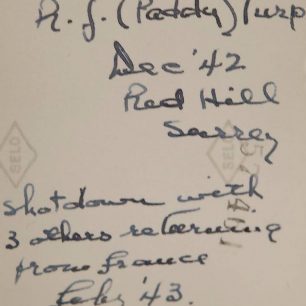 The reverse side of the above photo.
F/Lt. Edward Lefferts 'Doc' Thorne 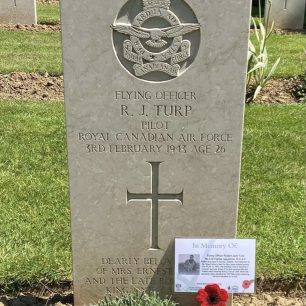 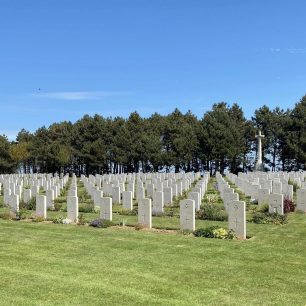 On 3rd February 1943, No.416 Squadron, RCAF, had a disastrous day – four pilots were shot down, by FW190s of JG26, though only one lost his life, Flying Officer Robert Jack Turp…

From the Squadron Operations Record Book….

“Weather- Cloudy clearing later in the day. Squadron led by Squadron Leader F. H. Boulton as escort to Venturas in Circus 258. Made rendezvous with bombers and Debden squadrons on schedule. Crossed French coast at Kordyck. Over Dunkerque, one bomber was seen to be hit by flak and the crew bale out. Bombing not seen. FW’s coming up from below to attack the second box of bombers seen by S/L F.H. Boulton who dived to attack and in the dive many FW’s seen to attack 416 (RCAF) squadron. Squadron Leader turned to engage notifying Wing Leader and needed help. This was acknowledged by the Wing Leader. Squadron fought all the way back to the coast against approximately two squadrons of FW’s and came out west of Calais, splitting into sections and returning to base. S/L F. H. Boulton’s R/T became unserviceable during combat. Considerable light and heavy flak experienced during this operation.
P/O Gofton, F/O Turp and F/O McKendy (Canadians) are missing from this operation.
P/O Rainville rescued from Goodwin Sands after being forced to ditch his aircraft.
One FW190 destroyed by F/Lt. R. A. Buckham. One probably destroyed by S/L F.H. Boulton.
Operational flying time 8.20 hours. Total flying time 1945 hours.”

The squadron received a report that Gofton and McKendy had been taken Prisoner of War on the 19th February.

FLYING OFFICER ROBERT JACK TURP was born on 10th May 1916, in Aurora, Ontario, the only son of Robert W. Turp, an electrician by trade, and Flossie Louise McDonnell. Robert Turp Senior died the year his son was born, which must have been very tough for Flossie, who was left with their daughter Edythe and the baby to look after. She re-married, to a farmer, Mr. Ernest F. Copson, and after completing High School, young Robert laboured for his Step-Father  on the farm, for four years, before enlisting in the RCAF, in 1940. He had never even flown as a passenger, but didn’t like farming and wanted to fly. On his enlistment paperwork, he wrote that he intended to study voice after completing his war service. He wanted to become a concert baritone singer.  (There was a case of music in his personal effects when he died.)

Robert began his initial training in Victoriaville, Quebec, in March 1941, where reports note that he had ‘a hard row to hoe’. Despite his rural background and basic education, it was here that his inherent intelligence began to shine through. He passed Maths and Signals with 100% and was keen, ambitious and courageous.
At Elementary Flying Training School at Windsor Mills, he passed 6th in his class, with 70%. By the time Turp completed his training, at the SFTS, Summerside, he was, “a good pilot, not excited easily,” with “no outstanding faults”. He received his wings on 30th August, 1941 and was sent overseas to England shortly after.

Flying Officer Turp was posted to No.9 Service Flying Training School on 3rd November 1941, and on to No. 52 Operational Training Unit before joining No. 416 Squadron on 18th March 1942. He was still with 416 squadron while they were at Redhill in the Autumn of 1942 and then moved with them to RAF Kenley only two days before he lost his life flying Spitfire Vb EP493, on the 3rd February, 1943.

Three other pilots from 416 Squadron were shot down that day…

F/O. Rainville, who ditched in the Channel and was rescued, although wounded.

The spelling of Flying Officer Turp's middle name differs in some records. It is usually Jack, but occasionally Jacques. Sources: Service files. 416 Squadron Operations Record Book. ........ Many thanks to Stephen J. Thorne for the photo of F/O Turp taken by his father, F/Lt. Thorne, the squadron's Medical Officer.