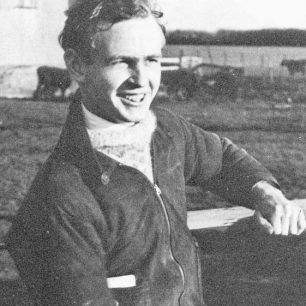 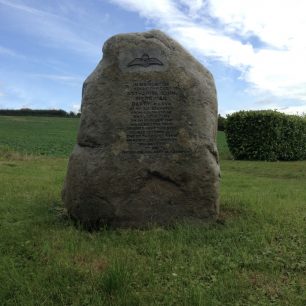 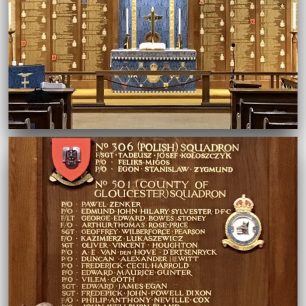 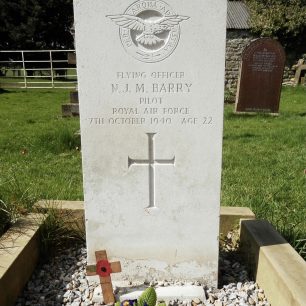 The Barry family were the first residents of “Alanglade” a grand house (now a museum) built by Transvaal Gold Mining Estates in 1915, to house their Mining Manager.
Nathaniel attended St. Andrews School followed by the Diocesan College, Capetown, (1931-1935) where he gained Greek and Maths with Honours.

In 1937, he travelled to England and took up studies in Mechanical and Technical Science at Pembroke College, Cambridge. Whilst there, he joined the university air squadron. Subsequently he joined the RAF Volunteer Reserve and, after training, in 1940, became Aide-de-Camp to Air Vice-Marshal Crespigny MC DFC who commanded No.25 (Armament) Group.

Barry was keen to pursue a more active career and in June 1940, he was posted to No.3 Squadron, at Wick in Scotland, to gain operational experience on the Hurricane. No.3 Squadron had recently arrived at Wick for rest and recuperation following a mauling in France, their journey north had involved a brief stay at Kenley. Their role at Wick, which was a Sector Station, involved defence of the naval base at Scapa Flow. The squadron remained in Scotland for the summer of 1940, moving to Castledown, a satellite station to Wick, on 2 September and Turnhouse on 16 September.

On 26 September 1940, Barry, along with Pilot Officer Frederick Harrold, joined No.501 Squadron at RAF Kenley. The Squadron had moved from Gravesend to Kenley on 10 September. Finding accommodation scarce, some of its personnel were put up in a local hotel, replacing No.66 Squadron who had only stayed 7 days. Barry flew two operational sorties, plus an air test the following day, with 5 more sorties over the next two days. However, on the morning of 30 September, his Hurricane was damaged in action and he force landed at Pembury, near Tunbridge Wells. He wrote to his sister in Yorkshire the following day telling her not to worry about the incident. He flew a further 5 times.


On 7th October, Barry was shot down and killed as the squadron intercepted a group of Me.109s north-west of Ashford. In the engagement, he had been seen to bale out but was dead when found at Wilmington. His Hurricane (V6800) crashed in Darenth.

Nathaniel Barry is buried in Finghall churchyard in Yorkshire. At the time of their son’s death, Nat’s parents were living at Keer Weder Farm in Franschoek, Western Cape.

On 26 May 2007, a memorial marker was erected, close to the spot where Barry fell, by the Shoreham Aircraft Museum.

Tragically, the Barry family suffered a further loss in WW2 when Nat’s brother, Surgeon Lieutenant Adrian Michael Barry was lost at sea on 1st May 1942. The ship he was serving aboard, HMS Punjabi, turned to avoid a suspected mine in thick fog and was accidentally rammed by HMS King George V. He is remembered at Plymouth Naval Memorial.

Jon Eagar, who is writing a book about South African pilots who served in the RAF during WW2, has given us some additional information about Barry’s education:

“Nathaniel Barry was one of about a dozen South Africans who joined the RAFVR through their University Squadrons,  several of whom flew in the Battle of Britain. He was at Western Province Preparatory School in Cape Town ( a feeder for St Andrews) with Percival Ross Frames Burton both were Battle of Britain pilots ,and JD Nettleton the first Lancaster pilot to earn the VC.
“My records suggest that his parents were  living in Franschoek in the Western Cape during the mid- to late 1930`s  and that he attended Bishops ( Diocesan College) from 1931 to1935 as did Percival Ross Frames Burton. Barry lost his life 10 days after Burton, two of thirty seven former pupils who served in the RAF and paid the ultimate sacrifice during the Second World War. ( Burton’s  brother was killed ten months later).
“The school interestingly had the highest number of South Africans serving in the RAF including seconded pilots, of all South African schools  while three schools, Bishops, St Andrews and King Edwards account for almost a third of the names on my data base.”