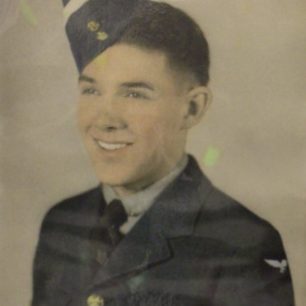 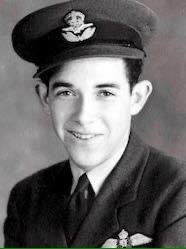 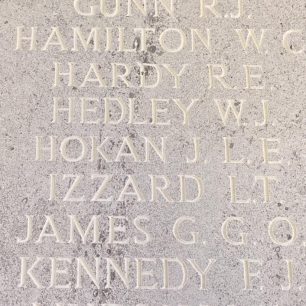 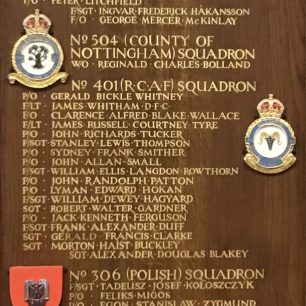 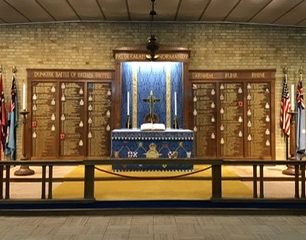 Junius Lyman Edward Hokan was born in St. Catherines, Ontario, on 4th March, 1922. He was the only child of Kauri Lyman, a Great War veteran, from Hawaii, who served with the Canadian Field Artillery from 1914-1919. His Mother, Ella Grace Bollen, was from Guelph, Ontario.

After finishing school, he studied at St. Catherine’s Collegiate Institute and Vocational School, where he showed “exceptional aptitude” in drafting, and studied aerodynamics in night school. He graduated in 1939, with honours in all subjects bar one, and went to work as a draftsman at Foster Wheeler Ltd, engineers and fabricators of boilers, industrial steam generators and heat transfer equipment.

When Hokan joined the RCAF in May 1940, they didn’t accept applicants from ethnic backgrounds, but although his Father’s origins were noted, he seems to have got through the assessment at Niagara Falls Recruiting Centre with flying colours. It concludes: “Fine type of lad if no objection to ancestry.”

Presumably, there were none, and Lyman commenced his training at No.1 Initial Training School, Course 19, on 21st February, 1941, where he showed “considerable interest in aeronautical engineering.” He also proved to be a capable pilot: “Above average. Smooth on the controls. Instrument and aerobatics good,” according to his instructor at No.9 Elementary Flying Training School, where he took Course 24. By the time he reached No.2 Service Flying Training School, Course 29, in May, he was a “high average pilot,” with a talent for instrument flying, praised for his ability to learn and think quickly.

He received his ‘wings’ on 7th August, 1941 and was recommended for a commission – highly unusual for a Black Canadian at this time in the war. In fact, it is believed that Hokan was the RCAF’s first Canadian-born Black pilot.

Lyman was sent overseas and transferred to the RAF on arrival in the UK. On 16th September, 1941, he was sent to No.56 Operational Training Unit at Sutton Bridge, to convert to Spitfires. From there, he was posted to “A” Flight of 610 Squadron, destroying a Ju88 off Lowestoft on 27th April. He shared in the destruction of a Dornier 217 on the 15th May and scored another Ju88 over East Yarmouth on the 22nd June. On the 19th August, flying as No.3 to Squadron Leader J. E. Johnson DFC and Bar, Hokan damaged a FW190 over Dieppe.

However, Hokan’s activities extended beyond his fighter operations. In March 1942, he presented the RAF’s Director of Operations with a new idea for a position fixing spherant that could be used by bomber navigators to give two sides of the position fixing triangle, rather than just one (like a sextant).  Such devices had been designed before, but were too cumbersome or complicated to be used successfully on an aircraft. There were plans to take Lyman off operational flying to work on this device and he continued to develop it after he was posted to 401 Squadron RCAF, a week after the Dieppe raid in August 1942.

Lyman flew his first operational sortie with 401 on 6th September. On the 23rd, the Squadron moved to RAF Kenley and only three days later, Hokan was killed in a tragic episode which became known as ‘The Morlaix Disaster,’ that also involved No.133 Eagle squadron based at Great Sampford and 64 squadron from Hornchurch.

The three squadrons were tasked with escorting USAAF B-17s on a daylight bombing raid targeting Morlaix, in Brittany. On the morning of the 26th, they deployed to Bolt Head, in South Devon where they re-fuelled and received a sketchy briefing on the day’s sortie. The pilots were told to expect little cloud and a strong headwind outbound.

When they took off, they encountered heavy cloud, obscuring ground features and, unbeknownst to them, a 100mph tailwind was pushing them off course. Soon they lost contact with their radio controller in England. Now trying to return home, turning into the headwind with fuel running low, and 10/10ths cloud cover, they were completely reliant on dead-reckoning.

The American pilots of 133 spotted land through a gap in the clouds and assuming it must be England, they descended, despite being told by S/L Gaze not to do so. Emerging beneath the clouds, they became easy pickings for the enemy A.A. defences of Brest. Four American Eagle squadron pilots were killed and six became P.O.W.s. One baled out and evaded capture. Eleven out of their twelve new Spitfire IXs were lost. The only one that made it back to England made a crash landing in a field near Kingsbridge.

Two aircraft from Kenley’s 401 squadron also crashed,  but the remainder of the Wing just about reached England safely, including all of 64 squadron under Tony Gaze’s leadership.

Although the official enquiry concluded that the debacle was the result of many contributing factors, Tony Gaze was scapegoated and demoted back to the rank of Flight Lieutenant. He continued to fly operationally, becoming an ace, with the DFC and two Bars. He survived the war and died in Australia in 2013.

On this fateful operation, Hokan, flying Spitfire IX, BR981, had used his auxiliary fuel tank for 15 minutes on the run down from Kenley to Bolt Head and then found there were no facilities to refuel. During the return leg of the sortie, he was forty miles south of the English coast when he reported, “Out of petrol, baling out, so long boys, will see you tomorrow.” He was last seen in a gradual dive. S/L Hodson asked permission to do Air Sea Rescue, but was denied. Hokan was never seen again. The Operation Record Book says he was a “keen type who is greatly missed by all.”

Amongst the personal effects listed when he died were slide rules, navigation and radio books, dark room equipment a ukulele and a mouth organ – all testament to the diverse interests of this creative, intelligent young man who might have achieved great things, had he lived.

Lyman Hokan was just 20 years old when he died and is commemorated on the Runnymede Memorial, panel 99.

The fates of all the pilots involved in The Morlaix Disaster are listed here…Rest in peace gentlemen and thank you for your service..