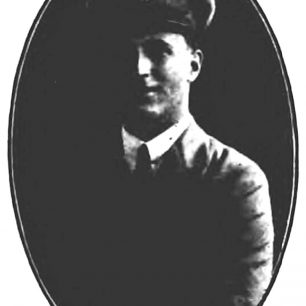 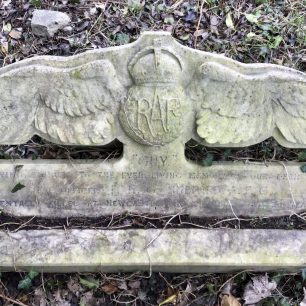 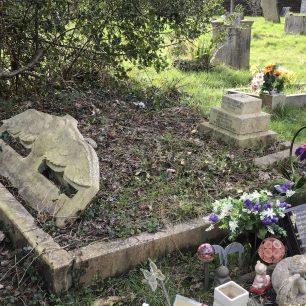 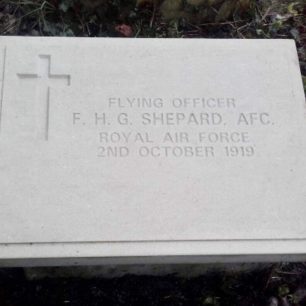 A new marker has been added to Shepard's grave (March 2021) because the original lettering had become illegible. The original 'wings' and surround remain in place.
Kev Barnes, CWGC

On 2nd October 1919, Flying Officer Frederick Hubert Guy Shepard AFC, and Lieutenant A. Page, of No.1 Communication squadron, took off from Kenley at 5.37am in De Havilland DH4 (K5783) bound for Newcastle to deliver official mails.


The journey was expected to take about 2 hours and 40 minutes but a fairly strong head wind slowed their progress. Over Durham, with fuel in the main tank dwindling, it became necessary to switch over to the gravity tank, which should have given them 20 minutes flying – enough time to get to Newcastle – but on the southern outskirts of Newcastle, the engine spluttered to a halt. Shepard decided to try and make it to St.James’ Park football field, but the strong wind held them back and  he was forced to attempt a landing in Strawberry Lane. By a superhuman effort, Shepard pulled up over the Gallowgate baths, narrowly avoiding the glass roof, but their wing clipped the coping stones on the roof of the house at the corner of Strawberry Lane and St. Andrews’ Place, crashing onto the pavement. Shepard was trapped under the fuselage unconscious but Lieutenant Page got him out. An ambulance removed Shepard to the Royal Victoria Infirmary where he was admitted, at 8.55am. He was bleeding from the nose and ears, indicating a fracture to the base of the skull, and had also suffered a fracture to his left arm. Having made sure Shepard was in good hands, Page turned his attention to the mail on board the aircraft, which he delivered within an hour of the crash, by taxi. Shepard succumbed to his injuries at 9pm.

The enquiry into Shepard’s death was held  at Newcastle Infirmary on 3rd October, 1919, by Mr. Alfred Appleby, the City Coroner, who returned a verdict of accidental death. In summing up he said it seemed:

almost a cruel thing that they got so near – within 100 or 200 yards of their destination – when the petrol gave out.

Flying Officer Shepard was the eldest son of Mr. and Mrs. A. E. Shepard of Cowley, Middlesex. He was educated at Cranleigh College before enlisting as a cadet in the Naval Wing (RNAS) of the RFC on 13 May 1917, where he gained his ‘wings’ a few months later. He was sent to Eastchurch as an instructor, where his repeated  requests  for foreign service were denied, much to his disappointment. After the Armistice, he was transferred to Hendon, where he was involved with shuttling Ministers and dispatches back and forth to the Paris Peace Conference. A navigation course at Stonehenge followed, and in the Spring, Shepard was sent to Kenley.

Frederick was only 20 years old when he died, but had already been awarded the Air Force Cross in August 1918. Shortly before his death he had been granted a short service commission (Gazetted 12th September, 1919).

I always looked upon him as one of a small and very loyal body that formed the backbone of the squadron.

Frederick was laid to rest with his baby sister, to whom he was Godfather. His coffin, draped in the Union flag was borne by three of his colleagues from the RAF, including Lt. Page and Shepard’s brother Laurie.

In March 2021, the CWGC added a Gallipoli marker for Shepard’s grave, because his name had become illegible.

The inscription on the original stone reads:

Towards the Southern corner of the cemetery.