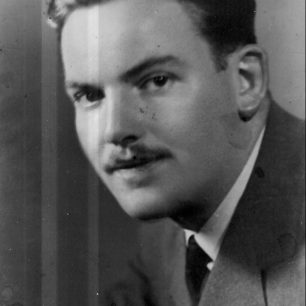 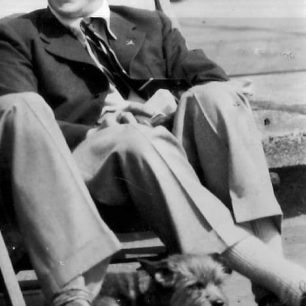 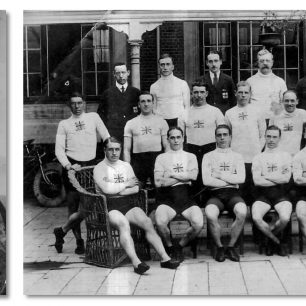 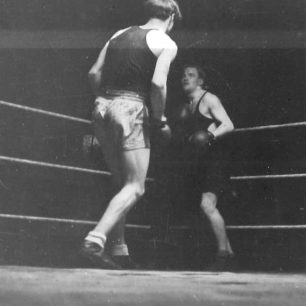 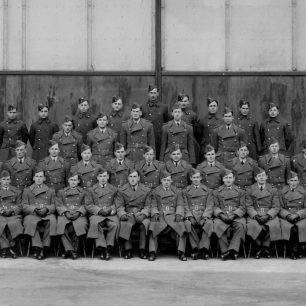 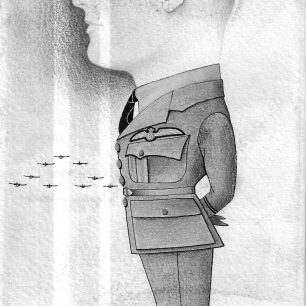 Cartoon of Donald Stewart while he was with 601 Squadron, signed Amies Milner, dated 1939.
Stewart family via Andy Long 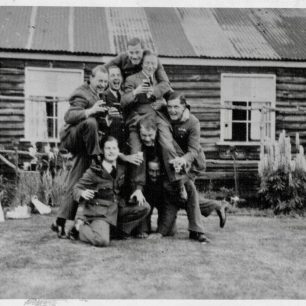 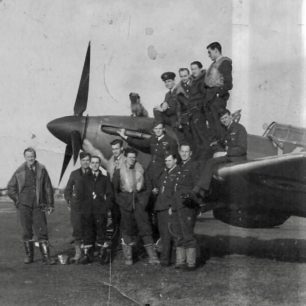 No.615 Squadron at RAF Northolt, Oct/Nov 1940. S/L Kayll, far left. F/O "Dutch" Hugo, with his hand on the exhaust. P/O Claude Strickland sat on wing. F/O Donald Stewart next to his dog "Midge" on top of the Hurricane.
Stewart family via Andy Long. 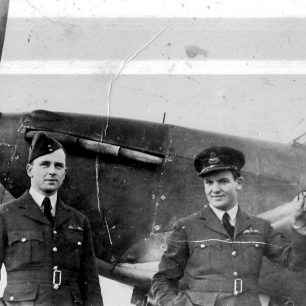 Claude Strickland and Donald Stewart, with "Midge" sitting on the wing.
Stewart family via Andy Long 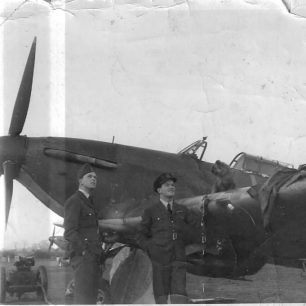 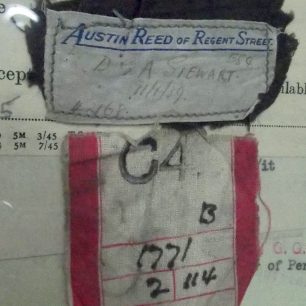 The label from Donald Stewart's uniform, which confirmed his identity as the airman recovered from the sea in April, 1941.
National Archives via Andy Long 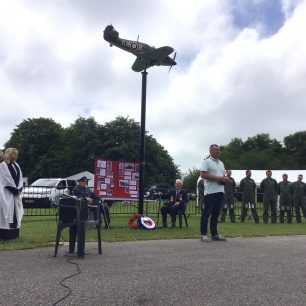 Hailing from London, Donald George Alexander Stewart was born in 1913, the eldest son of William George Stewart, a Scotsman, and Mary Sarah Stewart (nee Edwards) who was born in Dover. The couple had four more children, though two, sadly, died in childhood.

Donald’s Father, William George “Jock” Stewart had served for 25 years in the Metropolitan Police, but was best known as an outstanding all-round athlete, and represented England in Olympic cycling events in 1920 and 1924. After retiring from the police service, he became a publican and was also a keen horseman.

Donald was educated at Mary Abbots School in Kensington and was employed by the Royal Borough of Kensington, before enlisting. He had an interesting journey into the RAF, joining No.601 Squadron, Royal Auxiliary Air Force at Hendon on 12 February 1937 before leaving on 15 August. He then joined the RAF Volunteer Reserve, on 6 March 1938, as an Airman (under training) Pilot and began his flying training in Tiger Moths with No.20 Elementary & Reserve Flying Training School at Gravesend, going solo on 18 June. He subsequently did his flying at No.15 Elementary & Reserve Flying Training School at Redhill.

Stewart then joined the RAF on a short service commission on 5 December 1938 and began an ab-initio course at No.5 Elementary & Reserve Flying Training School at Hanworth. He soloed again on a Blackburn BII the following day.


His Father’s sporting prowess was obviously passed down to Donald and at some point, he was the RAF Officers’ Middle-Weight Boxing Champion.

On 14 January 1939, Stewart was sent to No. 1 RAF Depot, Uxbridge for a short disciplinary course, moving to No.5 Flying Training School at Sealand at the end of the month. He spent August 1939 on Furies at 9 Armament Training Camp at Porthcawl, South Wales.

After returning briefly to No.5 Flying Training School, Stewart went to the Training Squadron, No.1 School of Army Co-operation at Old Sarum, flying Lysanders, on 2 September. From there he joined No.613 Squadron at Odiham on 8th October 1939. At the time the squadron were flying Hawker Hectors before commencing conversion to the Westland Lysander in April 1940.

In late May 1940, Stewart took part in dive-bombing attacks on Calais, where No.613 Squadron had earlier dropped supplies to the surrounded British garrison. In August 1940 he volunteered for Fighter Command and joined No.7 Operational Training Unit at Hawarden on 22 August, where he converted to Spitfires. Stewart moved to No.6 Operational Training Unit at Sutton Bridge on 5 September where he converted to Hurricanes. He then joined No.615 Squadron at Prestwick on the 24 September.

By 10 October, Stewart was included in the list of operational pilots when No.615 Squadron moved to Northolt. He was among the flyers who stopped off for lunch at Kenley between patrols on 20 October.

No.615 Squadron returned “home” on 17 December 1940. Flying activity in January 1941 was hampered by the poor weather conditions with operational sorties possible on only 5 days during the month, although the atmosphere was lightened by a “Balloon shooting patrol” conducted in part by Stewart on 2 January.

Flying activity picked up in February with the Squadron undertaking patrols over Kent, bomber escort to France and fighter sweeps, also to France.

On the morning of 15 February 1941, Stewart was one of 3 pilots on “Mosquito” sortie when he was shot down in Hurricane I P3231 into the sea off Flushing – he was initially reported as ‘Missing’.

In April 1941 a body was recovered from the sea and was buried at Zeebrugge, in Belgium as ‘an unknown flyer’. After the war the body was identified as Stewart, from a tailor’s tab on his tunic which had been kept by a member of the local gendarmerie.

On 20th June, 2021, a 1/4 scale model of Flying Officer Stewart’s Hurricane (P3231), made by Andy Cloke was blessed by Rev. Annie Kurk from St. Luke’s, Whyteleafe, before being ‘unveiled’ by veterans Mike Metcalfe and Ken Raffield, with members of 615 VGS in attendance. It now ‘flies’ over Portcullis Field in front of RAF Kenley’s RAFA club in tribute to ‘The Few.’