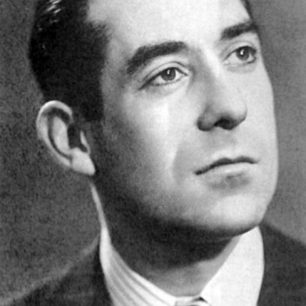 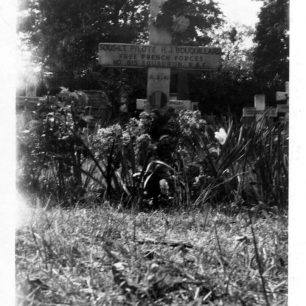 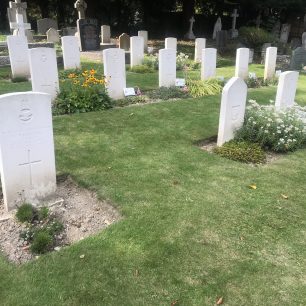 The space between the graves at St. Luke's, Whyteleafe, occupied by Bouqillard's grave before his remains were repatriated to Nevers, France.
Linda Duffield 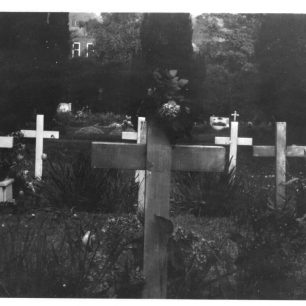 Henri Bouqillard was born in Nevers, France, on 14th June, 1908. He was called up in 1928 and served with the Chasseurs Alpin. When his service was over, Henri learnt to fly.

He gained his military ‘wings’ in 1938, was mobilised on the outbreak of war and was frustrated to find himself posted as a flying instructor.

After the Armistice in June 1940, he defied orders, deserted from his unit and escaped to England, where he enrolled in the RAF, on 19th July 1940. Henri went to No.5 Operational Training Unit, Sutton Bridge on 18th Aug 1940 and, after converting to Hurricanes, he joined 245 Squadron at Aldergrove, Northern Ireland on 12th September 1940.

Henri moved to 615 Squadron at Prestwick on the 18th September  and then to 249 Squadron at North Weald on 1st October. Bouquillard was in action at last and damaged a Dornier Do17 on 16th October, but two days later he made a forced landing at Padfields Farm, Church Road, Thornwood Common, after running out of fuel on the landing circuit.

He was shot down by a Me109 over North Kent on 25th October and made a forced-landing at Rochester. Seriously wounded, Bouquillard was admitted to the Royal Naval Hospital at Chatham. After a short convalescence he rejoined 615 squadron, just before Christmas 1940. He was the oldest pilot on the squadron. Commissioned in February 1941, Bouquillard was appointed Compagnon de la Liberation.

Flying from RAF KENLEY he was shot down by two Me109’s on 11th March 1941 in Hurricane IIa Z2757 and was killed when he dived into the ground near Tilbury, Essex.

He was buried on the 15th March 1941 at St Lukes Whyteleafe. Unusually, his remains were repatriated to his home town of Nevers after the war, and are now in the family vault at Jean Gauthern Cemetery .

Rest in peace Henri, and thank you Sir.

Fellow Free French pilot, Rene Mouchotte witnessed the demise of his best friend and roommate, Henri Bouquillard, as an “impotent onlooker.”
The Squadron had been scrambled at 6.30pm and climbed rapidly to 30,000ft. Mouchotte’s Hurricane wasn’t available so he was flying one with a defective supercharger, which left him lagging behind the formation – a vulnerable solitary aircraft, but with a clear view of what happened next. He spotted the exhaust trails of two aircraft, 1000ft above them. Bouquillard, weaving above the Squadron, climbed after them, immediately. He saw the enemy aircraft turn and then witnessed a plane “dive earthwards like a stone.”
The death of ‘Grand-pere,’ as Bouquillard was affectionately known, left everyone in a depressed state, particularly Mouchotte who felt an “overpowering sense of isolation” at the sudden loss of his roommate and confidante. He wrote in his diary:
….the day never passed on which I failed to admire his qualities of uprightness and courage. Savagely determined, he gave himself body and soul to his purpose; he took hard knocks without ill humour.
The entry for March 15th reads:
Our poor ‘Grand-Pere’s’ funeral was this morning. My room is appallingly sad now. We bore him to the cemetery [St. Luke’s, Whyteleafe] broken-hearted…. Goodbye, Bouqui.
(Linda Duffield) Source: The Mouchotte Diaries by Rene Mouchotte.

Written by Neil Quinn. This article originally appeared in the Kenley Airfield Facebook group. Many thanks to Joel Diggle.