You are here: Home>History>Timeline of RAF Kenley>1917-1930>"Stunt Flying" over Wallington? 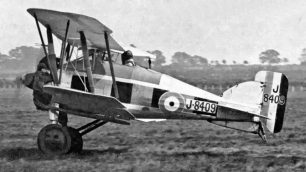 Gloster Gamecock I (J8409) of No.23 Fighter Squadron taking off from Northolt during the Sassoon Cup competition in May 1929, only a few months before it crashed in Wallington.
"Flight" magazine 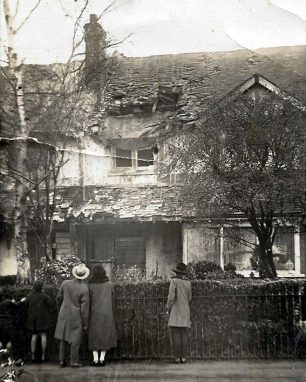 The damage to houses in Ross Rd, Wallington.
Airport of Croydon website 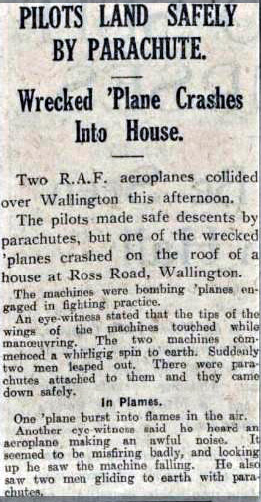 A press clipping about the crash on 7th November, 1929.
Airport of Croydon website 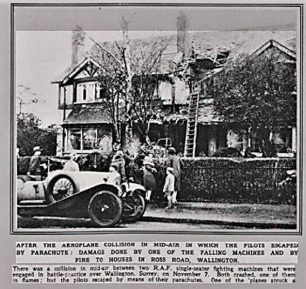 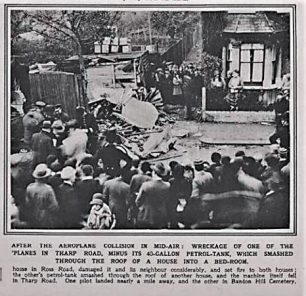 The wreck of one of the Gamecock bi-planes in Tharp Rd, Wallington.
Airport of Croydon website 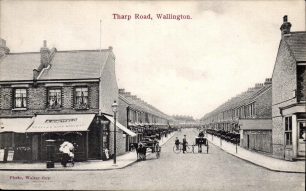 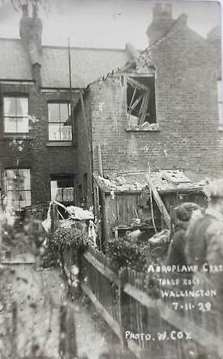 The damage at the rear of Honeyfield's Grocery shop in Tharp Road.
Rex Poge

On 7th November, 1929, Sergeant Francis Lawrence White and Flying Officer Reginald Stradling Collins, both of No.23 squadron based at RAF Kenley, had a lucky escape after a mid-air collision during “battle practice” over Wallington.

They were both flying Gloster Gamecocks (J7903 and J8409). Contemporary reports describe how their wing-tips touched and both aircraft began to spin earthwards; one bursting into flames as it fell. One of the Gamecocks struck 68 Ross Rd, and set fire to the house and it’s neighbour. The other destroyed a shed at the rear of Mr. Honeyfield’s  grocery shop, on the corner of Tharp Road and Demesne Road. It’s petrol tank fell through the roof of a house in Ross Rd, into the upstairs bedroom. Fires broke out and the live ammunition on board the aircraft began to explode. Croydon aerodrome’s fire fighters were called in to extinguish the flames.

Amazingly, both pilots managed to bale out successfully! Flying Officer Collins landed on waste ground adjoining the main road, near Croydon aerodrome, while Sergeant White was blown in the opposite direction and came down in Bandon Hill Cemetery.

A far worse crash had happened only the previous day, on Foster Down, a hill-top near Caterham, when a Lufthansa Junkers G.24bi (D-903) on a flight from Croydon in thick fog, struck trees, ploughed into the ground, and burst into flames killing at least six (possibly seven) people.

Understandably, these two incidents brought local concerns about air safety to a head, and a joint delegation was sent to the Air Ministry representing three local authorities (Beddington and Wallington Urban District Council, Carshalton U.D.C. and Coulsdon and Purley U.D.C) together with local M.P. Alderman R. J. Meller. The Wallington and Carshalton Advertiser reported, on the 19th and 26th of December, that their complaints about “stunt flying” fell on deaf ears. Mr. Montague, of the Air Ministry insisted that these were military manoeuvres necessary for the air defence of London, by RAF Kenley, but was more reassuring on the subject of the noise caused by night flying from Croydon.

There continued to be confusion in the minds of the public about the military activities of Kenley’s RAF fighters – low flying aircraft were usually assumed to be “stunting” from Croydon.

FLYING OFFICER REGINALD STRADLING COLLINS was killed on 25th February 1932, when his Fairey Flycatcher, (S1273), of No.401 (Fleet Fighter) Flight, collided with another flown by Lieutenant Commander Hugh Ditton, from HMS Courageous off Malta harbour.

SERGEANT FRANCIS LAWRENCE WHITE was born in February 1905, in Elwick, West Hartlepool, Durham. He joined the RAF in January 1922 as an Aircraft Apprentice and passed out in December 1924 as a Fitter, Aero Engines. He was later selected for pilot training and was granted a permanent commission in May 1931.

Through the 1930’s, White served at Martlesham Heath, RAF Leuchars, Hal Far in Malta, the RAF College at Cranwell and Air Staff at HQ 21 Group Sleaford. On 25th February, 1940, he was posted to No.74 Squadron at Rochford, and took command on the 29th.

On 23rd May 1940, he shared in the destruction of a Henschal Hs126 Reconnaissance aircraft, but was hit by return fire from the ‘plane’s gunner and had to make a forced landing at Calais-Marck airfield. He was rescued by F/Lt. James A. Leathart of 54 Squadron, who picked up White in an unarmed Miles Magister the following day. Fighter cover was provided by Pilot Officer J. L. Allen and Flying Officer Alan C. Deere.

On 8th August, 1940, White was posted to Fighter Command Headquarters and never flew operationally again. He retired from the RAF in September 1952 as a Group Captain.

Francis White died in Warminster in 1982.

Many thanks to Colin Brookes from the Airport of Croydon website for his permission to use their photos and newsclippings:

Many thanks to James Wood for his help with research and Rex Poge for the photos of Tharp Rd.