You are here: Home>History>Local Lives>Sheila Wilkie's Memories of Douglas Bader 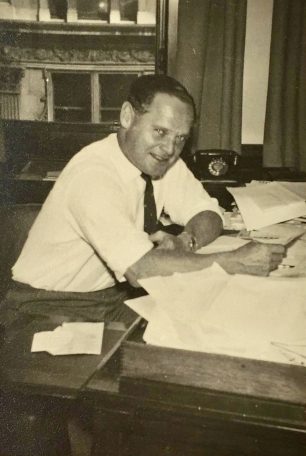 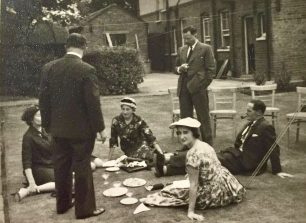 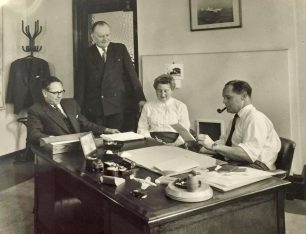 Sheila Wilkie was only a teenager when she went to work in the typing pool at Shell in 1954. She had been there for about three weeks when she was interviewed for a job with ‘Shell Aircraft’ – the division of the Company that operated about four aeroplanes which flew the directors from Croydon Airport to Shell’s offices in The Hague, Holland. The London office was over the Post Office in Bishopsgate when she first started and later moved to the South Bank.

Douglas Bader was the Chairman of Shell Aircraft Ltd. running the London Office and flying all over the world overseeing aircraft operations in the Middle and Far East – meeting and greeting people, visiting aircraft engineers and so on. His presence was very good for public relations and he was well respected and a very good boss.

Although Sheila was secretary to the Managing Director, she used to fill in for Douglas Bader’s secretary when he was away and got to know Bader quite well. The  staff used to refer to the management by their initials and Bader was known as “B.”

Bader has gained a reputation for being irascible but although he was blunt, Sheila never feared his mood as he invariably had a twinkle in his eye.  She says he didn’t suffer fools gladly or get along with ‘whingers’ or ‘shrinking violets’  but was always  full  of praise for elderly amputees who “just got on with it” and  particularly children. He helped them and his fellow amputees enormously,  being awarded the CBE for his work with them.

Douglas was in constant pain as a result of his amputations. He had trouble maintaining the comfort of his artificial legs and Sheila helped him by suggesting that he try using a one-way nappy over his stumps to keep his skin dry. Many days she went in to the office to find an aircraft engineer adjusting one of his artificial legs on the desk! Douglas had been a keen sportsman before his accident and continued to play golf afterwards – he had one of his prostheses made shorter than the other to improve his ‘swing’ and balance and had very strong shoulders and arms.

He got into the lift with Sheila one day and stood on her toe. Of course, he couldn’t  feel it and she was a little embarrassed to have to ask him to move. On another occasion Sheila saw him, “soften completely” as he described the peace he had felt when he was close to death in hospital after his terrible accident, and how he was brought back to the pain and struggle of living when he heard a nurse in the corridor say, “Be quiet, there’s a boy dying in there!” and with characteristic tenacity had thought, “Bugger that!”

He was invited to Sheila’s wedding but couldn’t go because he was attending a Battle of Britain commemoration in Norfolk, but he did throw office parties at his own home, and it was at one of these that Sheila got tipsy on champagne for the first time!

Bader had gone straight into the RAF after spending a good deal of his childhood at a public boarding school. The differences between his life and Sheila’s were thrown into sharp relief one day when he asked her to work late for the third night in one week. When she reminded him that she needed to get home to cook dinner for her husband, his reply was, “Get a cook in,” seemingly having no idea that she couldn’t afford one. However, he did try to help when Sheila asked for a higher salary. He was worried that a pay rise out of the blue would make it look as if he favoured her in some way, so he offered her two days off to have interviews with other companies, so that she could present evidence for what she would have been earning elsewhere.

Sheila worked for Bader for ten years, until she started a family in 1964.

All-in-all she considers that  he had a “nice way with him,” and was liked and admired by the people at Shell.

You can read more about Bader’s links to RAF Kenley here and here.

From a telephone conversation between Linda Duffield and Sheila Wilkie on 25/7/2020. Many thanks to Sheila for being so generous with her time and sharing her memories and photographs.