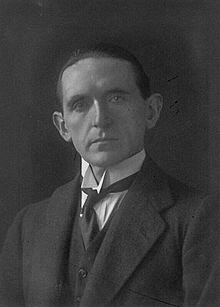 Ian Macpherson, 1st Baron Strathcarron. 14/5/1880-14/8/1937. Scottish Liberal politician and lawyer. Under Secretary for War, argued for the construction of an aerodrome at Kenley.
National Photographic Record 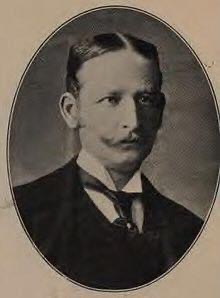 Frederick George Banbury, 1st Baronet of Southam. 2/12/1850-13/8/1936. Conservative MP known for formal attire and punctuality. Also an Animal lover who served as chairman of RSPCA. Argued against the construction of an aerodrome at Kenley.
Parliamentary Album 1895

On 5th June 1917, Sir F. Banbury, M.P. asked the Under Secretary for War, Mr. Macpherson, in Parliament, whether he was aware that the Royal Flying Corps had taken possession of 81 acres of Kenley Common and were felling trees on land that the City of London was under statutory obligation to maintain for the use of the public.

He also asked Macpherson if he was aware that no notice had been given to the Corporation about the intention to occupy the land for military use. The first they had known of it was when the Keeper had approached the Officer in charge, only to be told that the land had been taken under the Defence of the Realm Act.

Banbury went on to ask if any other sites, such as Farthing Down, had been considered for the purpose of an airfield.

In reply, the Under Secretary explained that the decision to take the land for an Air Acceptance Park and aerodrome had been made to assist in the defence against hostile daylight raids. The Common had been chosen because it was on a main road and could be served by three local railway stations, which could receive and handle aircraft components arriving from the manufacturers. It also had mains water and an electrical supply nearby. Macpherson argued that this was a case of extreme national emergency and the work had to proceed.

There was growing alarm amongst the general public about the apparent ease with which Gotha bombers and Zeppelins were able to roam the skies over England, bombing at will.

An editorial from ‘The Croydon Advertiser’, dated 16th June, gave strong support to the plans for a new aerodrome at Kenley:

“It was surely a short-sighted and unintentionally unpatriotic frame of mind which caused the weak-kneed protest of last week against the taking over of Kenley Common by the military authorities…we are very glad also that the objections to the taking of the Common for military purposes proved futile, as all such attempts we trust and feel confident will do.”