You are here: Home>History>Timeline of RAF Kenley>1917-1930>Pride Comes Before a Fall - Flying Officer Montgomery and the death of Dora Ball 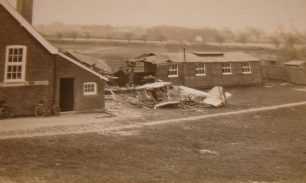 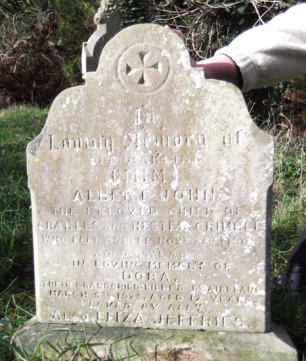 On 4th March 1925, Flying Officer Alexander H. Montgomery of 32 squadron, was instructed to make a practice flight from Kenley, wherever he chose, to increase his flying hours.

He started his Flight Commander’s Gloster Grebe I  (J7364) at 9.20am and found himself over his parents’ house in Warsash (now Jesmond Grove),  near Southampton at 10.10 am, where an error of judgement resulted in him clipping a tree and damaging the wing of his aircraft.

The Grebe was now completely out of control, and Montgomery resolved to try and land in a field beyond Locksheath Council School. An old Army hut in the grounds stood in his way. He almost managed to clear it but the drooping wing ploughed through the centre of the roof, swinging the plane round as he crashed.

The hut was being used for a bread-making class and the majority of the girls managed to escape. However, Miss Lena Booker, their teacher, was trapped with 12 year old Dora Ball at the far end of the classroom. She was severely injured and the little girl died of head injuries.

Montgomery escaped with cuts and bruises.

The Coroner returned a verdict of accidental death on the dead girl and attached no blame to the pilot. F/O Montgomery went on to have a long and distinguished career in the R.A.F. rising to the rank of Air Commodore and receiving a CBE.

Here is the story from the Portsmouth Evening News, 5th March 1925…..

‘PLANE DIVES INTO A SCHOOL’

“As announced in our last issue, a serious accident occurred at Warsash yesterday.  A Service aeroplane from Kenley, Surrey was flying low over the village when it struck a tree while turning round a house, and crashed into the cookery hut at the rear of the village school. One schoolgirl was killed and the cookery mistress was badly injured. The dead girl was Dora Ball (13) of Warsash, daughter of a Naval gunnery instructor and the mistress is Miss Lena Booker, of Woolston , who lives in Arundel. The aeroplane was piloted by Pilot Officer Alexander Hutchinson Montgomery, who lives at Jesmond, Warsash , the house around which he was flying at the time of the accident.  When the machine struck the tree a piece of the wing was broken off, and the steering being affected, the ‘plane crashed into the hut. This was an old Army hut and a cooking class of girls was being conducted in it at the time. The machine dived into one side of the building, passed through it and came out the other side.

Dora Ball and Miss Booker were badly injured. The little girl who was found under the wreckage of the machine, was suffering from a compound fracture of the skull and died shortly after being admitted to The Royal Southampton Hospital. Miss Booker, who had to be assisted out, was injured about the head and arm. She was taken to Southampton in the ambulance. Two other girls, Florence Humby and Dorothy Malins were also injured, the latter having her front teeth knocked out. The pilot, who escaped injury, with the exception of a bad bruise over the left eye, was able to render help to the children after receiving first aid.

Ploughed through the hut.

Mr E.G.Loader, the Headmaster, who saw the accident from his window, said that his attention was first attracted to the aeroplane by the fact that it was flying low and making a noise. He ran to the window but the plane had gone. In his opinion it had circled around again , but the next he saw the machine was was when it was “ploughing through the hut”. When he reached the playground the pilot was standing near the machine, bleeding from a cut over his eye. Most of the girls had run out of the school, and Dora Ball was extracted from the debris unconscious. One of the girls in the cookery school, according to another teacher, Miss Newbury, ran to the main building covered in blood.

Told by one of the children.

Another story is told by one of the children in the hut, Beatrice Cutler, who said “We were making bread and saw the aeroplane going backwards and forwards. Miss Booker told us to take no notice of it, but to get on with our work. The next I heard was a terrible crash and the noise of splitting wood, and we saw the aeroplane come right through the hut and out the other side. All the girls except Dora Ball ran out screaming to the main school.  Dora and Miss Booker were up at the other end of the hut, and we saw nothing of them. At first we thought that Dora must have run out as well, until someone found her lying under some wood.”

Dora Ball was laid to rest in Southampton Old Cemetery.

Rest in Peace, little one….

Alexander Hutchinson Montgomery was born in Itchen Abbas, Hampshire, on 18th June, 1904. His Father was James Pipon Montgomery a retired Captain of the Royal Navy, born in Ireland. His Mother, Evelyn was from the Isle of Wight. He had two brothers and two sisters. In 1923, he became a Flight Cadet at the RAF College. Subsequently, he joined 32 Squadron on 17th December, 1924, where he remained until May 1928. His horrible accident in 1925 doesn’t appear to have held him back. He stayed in the RAF, ascending to the rank of Air Commodore and was awarded the C.B.E. and  the M.B.E., as well as being Mentioned in Dispatches on 1st January, 1943.
Sources:
http://www.rafweb.org/Biographies/Montgomery.htm
http://sussexhistoryforum.co.uk/index.php?topic=7105.0%3Bwap2
Photo:
Many thanks to Dave Fagan at hampshireairfields.co.uk
http://www.hampshireairfields.co.uk/hancrash.html
Many thanks to Friends of Southampton Old Cemetery for the photos of Dora Ball’s grave.
http://fosoc.org/home/
Many thanks to Richard Wilson, member of Southampton Heritage Photos facebook group.