You are here: Home>About>Blog>Kenley Revival; A Personal Reflection 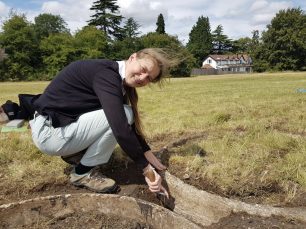 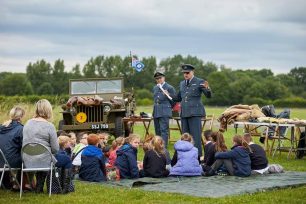 The Kenley Revival Learning Festival, which engaged 856 learners over 5 days. 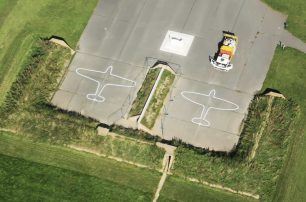 As part of the Project, the Tribute was moved forward and a new central wall reconstructed. Spitfire and Hurricane outlines were added. 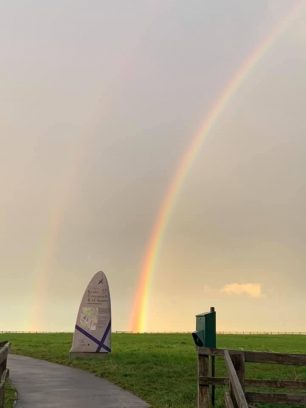 One of the Spitfire Wing signs - part of the new Heritage Trail.
Anthony Eeles

The Kenley Revival Project came about through enormous passion for the site, a hefty dose of naïveté and winning the lottery.

I first visited as a newly minted Inspector of Ancient Monuments in 2008 and on understanding the deterioration of the protected Blast Pens, realised we needed a serious project. Even then I was getting ahead of myself – 20th century archaeology/architecture wasn’t well understood then (it still isn’t really) and after discussing the issues with colleagues, I realised that there wasn’t an established approach to conserving what we subsequently called ‘impermanent architecture’.

So began a long series of creative meetings/brainstormings/ with Chris Baguley and Mike Simpson of the Kenley Airfield Friends Group and Bob Warnock and Andy Thwaites from the City of London. I remember these with great fondness even though they were often in the evening and in the chilly Merlewood offices, although I also remember pitching to RAFA for their blessing, Dragons’ Den style.

What sort of project did we want? What did we want to achieve? That took about a year to work out in itself. It was clear that the Heritage Lottery Fund (now the National Lottery Heritage Fund) were the key people to approach and it took a year to get them to visit site, although they had been very encouraging after our initial expression of interest. It rained torrentially, in typical Kenley weather when they finally made it to site, but they loved it. Then began a strange obsession with toilets. Great project they would say, lovely ideas, brilliant stories, and we’re really interested in your conservation approach. But where are the toilets? Another year went discussing toilet options. This was a valuable lesson – when designing a heritage project, ideas flow easily for events, learning, activities, and it’s very easy to be bold and ambitious with both physical and digital engagement with loads of people, but where people can pee seems to be fundamental!  No toilets, no project was the clear message.

So we thought about the toilets, drew on flip charts, stuck post-it notes on walls, talked wildly about apps, QR codes, sensibly about school kids and passionately about collecting oral histories whilst we still could. We devoured a lot of tea and a lot of hard graft, mainly by Andy Thwaites of the City Commons, lead to a very heavy round one HLF application being lodged – I even took some of it by hand to their offices. The scale of the paperwork was something to be seen – enthusiasm, expertise, even decent toilet provision wasn’t enough. Details of management, maintenance, human resources, budgeting, financial oversight, conservation schedules, activity plans, learning plans, teacher engagement, open days, panels, leaflets, trails and much, much more was all needed. There are times in this sort of process when you wonder whether it’s worth the grief and effort. Would we have started if we’d known how much hard work was involved?

The importance of the site answers that question. One of the conservation options discussed at the early seminar ‘Concrete Day’ was whether to let the site gradually crumble and decay. This would reflect the temporary nature of the site, constructed in response to a clear and present danger, and in poignant commentary on war and the lives lost. Not all heritage can be saved across the country – there isn’t the money, skill and resource to save everything, so some gets recorded and then is gradually lost, and of course more gets lost to development. However, when something is so important, so significant, then it deserves every effort to save it and Kenley comes firmly into this category.

At times it’s helpful to be able to throw around superlatives, and we had a great one – Kenley was identified by the English Heritage thematic research into military airfields as ‘the most complete Battle of Britain fighter airfield remaining’. Combined with the 2015 75th anniversary of the Battle of Britain and the imperative to collect oral histories, frankly before people died, the HLF awarded us a round one pass – a year’s funding to employ people and develop the bid in excruciating detail. I had been hopeful we would get it – the project was solid, well put together, but you never know what other projects you will be up against. One bitter point was that Mike Simpson passed away before we got the round one grant – he contracted cancer and it was terribly upsetting that he didn’t know all his hard work paid off. And this was also the case when we landed the major grant. Chris Baguley, who was such a rock on those long cold evenings designing the project, died before he knew we had been successful. It was very much his passion for the site, and vision for what we could achieve that drove us all on, and he and Mike are both greatly missed.

I hope we’ve done them proud even though we’ve certainly faced challenges. These have ranged from coping with extremes of weather, huge delays in getting planning permission for the new interpretation and of course the serious chemical reaction which has led to mortar failures. This has been frustrating, particularly with the time taken to understand the problem and design how to rectify it.

We spend a lot of time discussing exactly why these sites are so important, and much of it comes down to authenticity. What is real, what is true, what can you touch to connect with the stories of the past? At Kenley, it’s the very bricks and mortar (and earth and concrete), so it has been crucial to use material as close to the original as possible, otherwise we end up with something inauthentic, and part of the specialness is lost. So whilst it’s been frustrating, unsightly and time-consuming, we’ve learned much which is already being useful to other communities trying to save their sites.

And there have been a lot of great times on the airfield over the course of the project – Concrete Day was a great one – getting a series of boffins from the world of Military Conservation and the HLF to chew over conservation philosophy and then visit the site for the practical session (hottest day ever this time). The Heritage Days at the Portcullis were brilliant – so many people came to learn about the site and enjoy themselves, either on walks, listening to the band or even trying Anzac biscuits at my ‘Cooking on the Ration’ stall! The flyovers are always spectacular, and the Battle of Britain Memorial Flight display, with a Spitfire and Hurricane dancing over the airfield against the most amazing sky was something I won’t forget (I was allowed to climb on the roof of a City Commons truck for a better view).

The Community Archaeology though has been my highlight – I’m a dirt archaeologist, although it’s rare I get my trowel out these days. But we’ve managed three seasons of small excavations, and brought many new people to field archaeology and the point of discovery. You don’t even need to dig yourself to be fascinated by what turns up; I particularly loved the Air Ministry boundary stones and fence posts that turned up. We ran a number of tours of the trenches and airfield and I’ve learned that people can be as interested in a serviceman’s dog tag as by Tutankhamen’s mask; local stories will always be fascinating as they resonate very closely with us.

This truth is why the Kenley Revival project has been so engaging. The project team has captured and told stories about individuals, often from far afield that lived, worked and died here at a very particular moment of crisis. By project completion, I hope we will have created a fitting legacy to honour those who went before us.