You are here: Home>History>Timeline of RAF Kenley>1917-1930>Henri Farman Bends the Rules 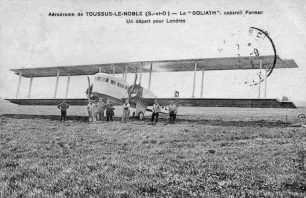 A Farman F.60 Goliath at Toussos-le-Noble before a flight to London.
Unknown: Public Domain 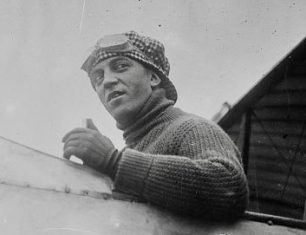 French aviator, Maurice Chevillard, was one of the passengers on the ground-breaking flight to Kenley.
US Library ofCongress ggbain14948

On 8th February 1919, pilot Lieutenant Lucien Bossoutrot  flew from Toussus-le-Noble to Kenley in a Farman F60 Goliath, with thirteen military personnel on board…

The purpose of this flight remains somewhat obscure, but it was possibly an attempt, by Henri Farman, to circumvent British objections to a commercial passenger service between France and Britain. The French authorities gave him the go-ahead but in Britain there were still wartime restrictions on civilian flying in place.

Farman cunningly persuaded the French government to buy his “Aerobus” and then filled it with military types, circumventing the British restrictions by making the flight ‘military’ and gaining himself considerable prestige.

They had taken off from Toussus-le-Noble at 11.15am and arrived at Kenley at 2.30pm that afternoon – a flight of two and a half hours, a time which they beat on the return journey the following day, which was achieved in two hours and ten minutes, arriving at Buc at 3.50pm. This may not sound very impressive but the same journey by road and ferry would have taken at least a day.

By September, French aircraft were flying into Hounslow and by the following year Farman Goliaths were operating a regular passenger service from London to Paris out of Croydon.

The pioneering flight was reported in ‘The Nottingham Evening Post,’ on Monday, February 10th, 1919:

Fourteen French Officers on Board.

After flying from Paris to Kenley, near Croydon, on Saturday, the first air ‘bus, with 14 French officers on board, started on the return journey at midday yesterday, inder fine weather conditions. It landed safely at its aerodrome, near Paris after a flight of 2 hours and 10 minutes.

During the week-end the French aviators were the guests of  R.A.F. officers at Kenley aerodrome and elsewhere, the party spending Saturday night at the Savoy Hotel.

An official of the Air Ministry, discussing the journey to London with a Daily Chronicle representative last night said:

“This was a non-stop trip, with several remarkable features about it. The aeroplane accomplished the journey of 200 miles from Paris to Kenley in 2hours and 35 minutes. All 14 officers, in spite of the cold weather, wore their ordinary uniform without being protected by flying ‘warms’ as us usual.

“When the Channel was reached, a light champagne luncheon was served, and the officers smoked and played cards. Altogether it was a very enjoyable journey, and similar trips are likely to be arranged later on.

“Throughout most of the journey, the aeroplane travelled at a height of 3000ft, but rose to 3600ft over the Channel.

“Among the passengers was the well-known pioneer trick aviator, Sgt. Maurice Chevillard who did such a lot of sensational flying at Hendon in pre-war days.”

This morning’s Paris papers publish interviews with passengers. All express sincere appreciation of the cordial reception given them by British officers at their club-house. The pilot of the machine, Lieut. Bossoutrot, explained that he changed his course on the way back from Folkestone, and made for Berck. He was fifty minutes over the water, with wind against him. The journey was accompanied without a hitch.