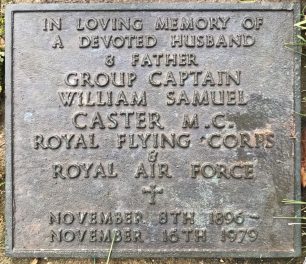 At the front of Airmens’ Corner, at St. Luke’s Churchyard, Whyteleafe, are two metal plaques. One of them remembers an airman who served with No.24 (Communications) Squadron, at Kenley, in the 1920’s.

William Samuel Caster was born in November, 1896, in Peterborough. His Father, George, seems to have died when William was still a child – aged four, he was living with his Mother, Alice, and his Grandparents, Isaac and Annie Dell, at Fletton Ave, Peterborough.

In the Great War, William served as a 2nd Lieutenant with the 2/1st Huntingdonshire Cyclists, before transferring to the Royal Flying Corps. Historian, Norman Franks, says that he was an army and Royal Flying Corps observer in the Middle East.

Caster was a pilot with No.27 Squadron, when the 9th Wing bombed the ammunition depot at Auloyne on 19th March, 1917. He escaped unhurt when his Martinsyde G.100 ‘Elephant’ ,7499, was shot through in combat with enemy aircraft and he force-landed at Brie, inside the lines. He was awarded the Military Cross for bombing raids in 1917.

In his memoir, the famous Schneider trophy pilot, David D’Arcy Greig, recalls that Caster was a Flight Commander on No.24 (Communications) Squadron, when he was posted to Kenley at the beginning of September, 1923:

In view of the amount of instructional flying done by this unit, it was rather odd that I can recall only one member of staff, Flight Lieutenant Caster, being a properly qualified instructor. However, within a month or so of my arrival, Flying Officer Kay-Williams was sent to the CFS for an instructor’s course and thereafter a succession of pilots went to Upavon to qualify.

24 (Communications) Squadron were equipped with a wide variety of aircraft types during their time at Kenley. As well as training, their communications work involved transporting urgent mail and passengers, notably the politicians and dignitaries involved in negotiating the Treaty of Versailles after the Great War. They also played a significant role during The Great Strike in 1926.

In May 1932, he obtained his Royal Aero Club certificate at the Royal Aircraft Establishment, Farnborough, and was promoted to Wing Commander in 1934. By 1938, Caster was a Group Captain and this was the rank he held on his retirement in 1946. One of his later jobs was helping in the development of Gatwick.