You are here: Home>History>Timeline of RAF Kenley>1917-1930>Douglas Bader at Kenley 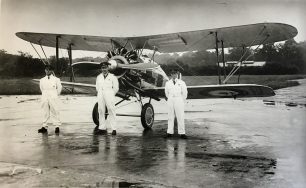 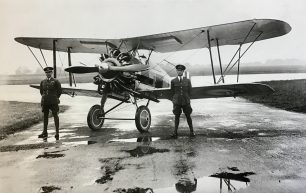 On 25th August 1930, a promising young graduate from the RAF College at Cranwell arrived at Kenley to join his first squadron, No.23, flying the Gloster Gamecock.

Douglas Bader had wanted to join the RAF from the age of 11, and had won a prize cadetship for Cranwell in 1928. During his time there he had represented the College at Rugby, Shooting, Boxing, Athletics, Hockey and Cricket, proving himself a tenacious and determined competitor.

While at Kenley, he developed a talent for aerobatics and in 1931, successfully defended his squadron’s ‘pairs’ aerobatic title, with Flight Lieutenant Harry Day, in the RAF pageant at Hendon.

On 14 December 1931, shortly after the Squadron’s Gamecocks had been replaced by Bristol Bulldogs, he flew to the Reading Aero Club at Woodley, in Bristol Bulldog Mk. IIA, K1676. He had only received his commission eighteen months before and was on the verge of a call-up to play rugby for England.

Group Captain Peter Townsend recalled what happened in his book, “Duel of Eagles”:

“After lunch someone said, ‘I bet you won’t roll at nought feet.’ Bader did, and the graceful little Bulldog ended up in a shapeless ball of twisted metal.”

Percy Cruttenden, who became an ATA pilot in 1941, witnessed the crash and was the first person to reach the badly injured pilot:

“I was standing on the aerodrome,” he said “and saw Bader attempt a ‘slow-roll’ at an impossible height – as low as 120 feet. I dashed towards the circling machine, for I knew he must crash. His machine nose-dived to the ground, which it struck with terrific force.”

Cruttenden undid the straps and somehow managed to manhandle Bader out of the cockpit. He was transferred to an ambulance, where Cruttenden stuck a large hand tightly over the pilot’s damaged leg. Bader was convinced his life was saved by that action.

Douglas was rushed to the Royal Berkshire Hospital in Reading, where, in the hands of the prominent surgeon J. Leonard Joyce (1882-1939), both of his legs were amputated – one above his knee and one below the knee.

Within six months of the crash, Bader was learning to walk again on artificial metal legs. The RAF decided he could not return to flying duties, but that changed when war was declared and, after completing a refresher course at Cranwell, he reported for duty at RAF Duxford in February 1940. Seven days later he took to the skies in a Spitfire for the first time, a machine he later described as ‘the aeroplane of one’s dreams’.

His recovery and determination to fly again in combat for the RAF made him symbolic for many, of Britain’s bulldog spirit.

First Officer Percy James Wulliens Cruttenden, (who pulled Bader from the wreckage of his Bulldog), died in Brighton in 1978, aged 73. He was in the ATA for four years from 1941 until the end of the War. By all accounts he was a competent and careful pilot who was popular with all ranks. In peacetime he worked in the Prison Service.