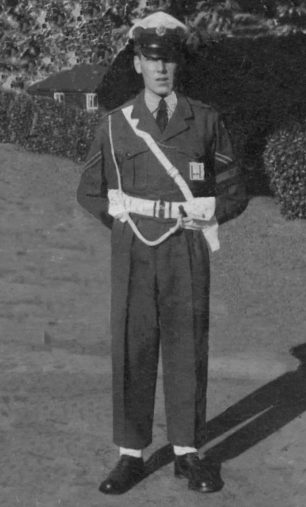 National Service took me into the RAF in June 1958. At RAF Cardington, after a lengthy selection process, l was informed l was to become a RAF Policeman. I later signed on. I had some good postings in the UK, three years in Kenya and three years in Germany. During the twelve years l served, my family and l moved house thirteen times and by the time our daughters were ten and eleven they had each attended nine different schools. I left the RAF after twelve years to get my family and my daughters’ education settled. No regrets.

We lived in 9 Anson Close while I was stationed at Kenley between 1963 – 1966. In the RAF you were entitled to an A, B or C class married quarter.

All the 1928 build houses at RAF Kenley’s married quarters  were Class B – two bedrooms.

There were actually two doors about six inches part separating them. A single bed mattress between the two doors acted as sound proofing. In the lofts there was an electric power switch over system to switch the power from one house to the other, when your neighbour had one of the bedrooms of your house.

During our time in 9 Anson Close, it was being continually worked on by the Ministry of Public Building and Works.

When built in 1928 there was no bathroom in the married quarter houses. At some time before 1963 the kitchens were divided in half and one half converted into a very small bathroom. So small in fact that the sink overlapped the bath by about six inches and included a small airing cupboard.

Not long after we moved it it was decided that the switch to control the immersion heater should be removed from the back of the cupboard to just inside it’s door. It was found that the power cable to the immersion heater was inadequate for its task, so had to be rewired. This entailed removing the linolium and floor boards of our two bedrooms, to route the new cable to the master switch board in the cupboard under the stairs. A complete mess was made by the electricians which entailed new floor lino and rooms decorated!

Then it was decided to replace the antiquated electric cooker in the kitchen, but the electricity cables needed to be replaced! Yes, all the bedroom floors ripped up again, new lino and rececoration of the bedrooms!

In the lounge there was an open fire incorporating a back boiler heater to provide hot water. One cold winter’s day we realised that the back boiler was leaking water. Yep, the wall alongside the fireplace ripped out to gain access to the two inch diameter water pipes going to the hot water tank in the airing cupboard! We were without the use of the fire, the main heating for the house, for nearly two cold winter months. Eventually it was repaired and fire place usable.

Next it was decided that all the married quarters should be redecorated , even though the two bedrooms had already been redecorated after the floors had being ripped up for the electricity improvements.

In early February 1966, whilst we were cleaning the house up for our “marching out” procedure, (when the house and all its contents were inspected against its inventory and for any losses or breakages), there was a knock on the door from workmen who wanted access to replace the perfectly good toilet bowl and cistern. I refused them entry as we had just about finished readying the house for hand-over on our departure, for our posting to RAF Laarbruch, West Germany (as it was then).

Apart from all that we quite enjoyed our stay at RAF Kenley!

Many thanks to Bob at controltowers.co.uk for permission to add Roland Elworthy’s photo of Kenley’s married quarters.