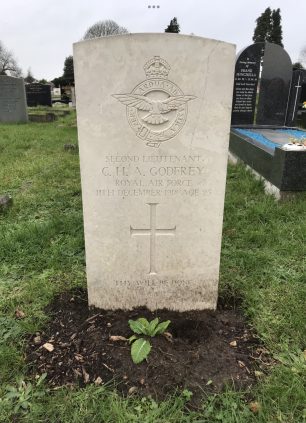 2nd Lieutenant Charles Henry Albert Godfrey, was a local lad whose family lived at No.5 Norfolk Terrace, Godstone Rd (the row of shops next to The Kenley Hotel). As far as we know, he never flew from RAF Kenley.

Charles was killed when his Sopwith Camel, F1408, stalled and spun into the ground at Turnberry, Ayr, Scotland, on 11th December, 1918.  He was with No.1 Fighting School, which had been set up to train pilots in tactical flying.

CHARLES HENRY ALBERT GODFREY was born in Battersea, South London, in 1895. His parents were Albert Thomas Godfrey, a Common-keeper for London County Council, and Rose Havard Godfrey. The couple had seven children, though one died in infancy.
Charles worked as a telegraph messenger when he was 15 years old and had a job as a clerk when he enlisted on 6th December, 1915. His records are quite hard to make out but it looks to me as though he initially joined the 3rd/16th Battalion, The London Regiment, and was mobilised on 1st February, 1916. Subsequently, he was transferred to the 1st/16th Battalion, Queen’s Westminster Rifles, and left Littlehampton for Le Havre on 5th July, a few days after the beginning of the Battle of the Somme, when the 1st/16th suffered terrible losses during the attack on Gommecourt.

At the end of August, 1917, Charles returned to England from Etaples and transferred to the Royal Flying Corps, No.2 Cadet Wing, Hastings, on 12th March, 1918, retaining his former rate of pay. He was graded as a Flight Cadet on 1st July, 1918.

There is some extraordinary footage of the King’s visit to No.2 Cadet Wing, St. Leonard’s, on 30th August, 1918 here, (I wonder if Godfrey is among them).

After his fatal accident on 11th December, 1918, Godfrey was posthumously discharged to a commission. He was laid to rest in Bandon Hill Cemetery, Wallington, Grave A.82.