When I originally wrote this article, I could find no plans which numbered the pens in a manner consistent with what was actually built. However, a drawing has since come to light which does match, so I have revised this article accordingly (October 2020).

When the threat of war was imminent in 1939, a lot of hasty building work was carried out at Kenley to make it ready for modern warfare.

It was thought that keeping aircraft in hangars was not a good idea as one direct hit from an enemy bomb could wipe out an entire squadron. So, to provide a better level of protection, it was decided to “disperse” the aircraft around the airfield. To further increase protection, blast pens – also known as fighter pens or E-pens – were built. The initial building of these was complete and the airfield “ready” by April 1940. Originally there were 12 pens at Kenley, of which all except one still exist in various states of completeness. These would provide protection for two squadrons, a maximum of 24 aircraft. Aircraft could also have been positioned around the airfield on various triangular and pentagonal hard standings.

In this report, the pens are referred to as 1 to 12 in an anti-clockwise direction from the Victor Beamish Avenue entrance/hangar area.

This does cause a slight problem in that pen 1 is the only one which has been completely demolished. So, unfortunately, the first pen encountered today when walking north past the Officers’ Mess is number 2.

Each pen was the shape of a capital “E” when viewed from above, so forming two “bays” within each pen. Earth-covered revetments surrounded the aircraft on three sides providing some protection not only for the aircraft, but for anyone refuelling, rearming or repairing them. The angled nature of the revetments would direct any nearby blast up and over the bank, but were no protection against a direct hit.

In this document, the component parts of the pen are referred to as “Rear Arm”, “Outer Arms” and “Centre Arm”. The term “wall” is often used to mean the entire construction of brick/concrete/earth, but, as the arms actually contain elements within them which are walls, I’ve used the term “arm” to save confusion. In addition, “Spine Wall” is often used to refer to the centre arm, although technically, a spine wall runs parallel to the long axis, so should really be the rear wall!

Pen number 11, also known as the “Tribute” pen, gives the best idea of how they would have looked originally. On this pen, you can see reconstructions of the frontal brickwork.  Most of the pens lost this brickwork post-war creating a sloping earth bank to the front. The centre arm of this pen was reconstructed in 2017 and it later became apparent that its frontal brickwork had not been rebuilt as it would have been. Due to a rare chemical attack on the bricks and mortar used during this construction, it became necessary to carry out extensive rework in 2021. The opportunity was taken to rebuild a more representative construction at this time, complete with supporting buttress. It also became apparent that the frontal brickwork of the two outer arms, which were reconstructed in the 1990s, were also historically inaccurate. The drawing above shows how pen 11 looks in 2020. 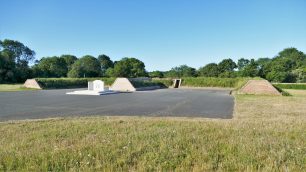 The rear arm contains a shelter which was built either from pre-cast concrete sections, or from semi-circular corrugated iron sections over-poured with concrete. The left hand doorway provides access not only to the shelter, but also to the rear via a dogleg. The right hand doorway provides access to the shelter only. There were originally reinforced concrete doors at both ends of the shelter. At a later date, more substantial steel doors have been added to some pens and other doorways have been bricked up to prevent access. 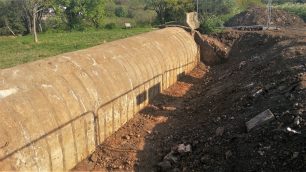 The shelter would have provided protection for personnel during an air raid, but they were also used for storage. 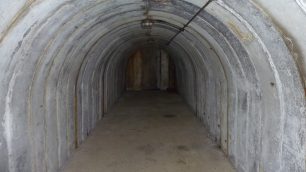 Perhaps the most noticeable difference between the pens is when viewed from the rear. The fronts of the pens are all virtually level with the perimeter track, but, mainly due to the topography of the airfield, some of the pens have contour drops behind them. 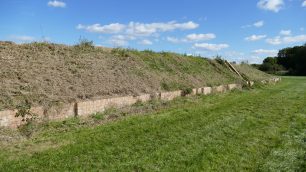 This necessitated the construction of larger reinforced concrete walls at the rear as opposed to the low brick wall seen at the rear of pen 11. 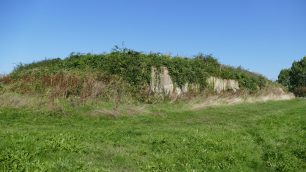 Some even needed to have a sloping ramp leading up to the rear doorway. 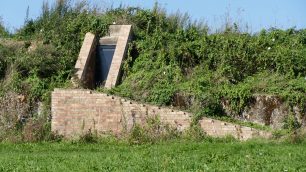 The two outer arms are constructed from banked earth with a poured concrete capping section on top. A concrete retaining wall/berm is present on the inner side, but there is generally no retaining wall on the outer side, except possibly on pen 6. 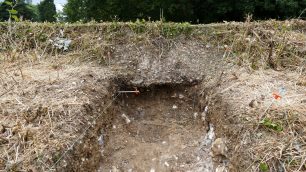 During the archaeological dig in 2018, the construction of pen 6 was investigated and a metal rod was driven through the earth below the concrete capping and no internal brick or concrete structure was found. 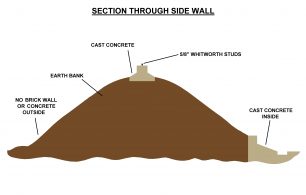 The centre arm was originally just a simple wall, probably 215mm wide and 2.5m tall and may have had sandbags surrounding it for extra protection. The wall originally went all the way up to the rear arm section with no easy access behind it between the two bays. The concrete retaining wall/berm sections on the rear and outer arms must have been added after this wall was built as you can see a cut-out in this concrete berm in the middle of the rear arm. 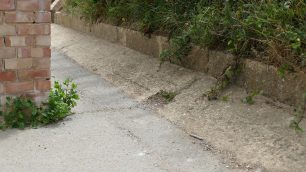 At a later date, the centre wall was either cut back or possibly rebuilt at one and a half bricks thick (350mm) to allow access between the two bays. An additional wall was added at the rear to prevent the full effect of a blast in one bay affecting the other.

The centre arm was further modified to the prism-shaped version with earth banks as seen on the pen 11 reconstruction. The frontal brickwork on these centre arms was built up against the existing centre wall with little or no keying in to the existing wall. Also, the brickwork was only one brick thick (215mm). This obviously caused stability issues, with some pens acquiring additional tie-bars to prevent them failing. Pens 5 to 12 went one stage further with brick buttresses built onto them.

This modification to the prism-shape was probably carried out following the famous raid of the airfield on August 18th 1940. The centre walls were certainly in this new configuration by November 1941. The buttresses were added between 1942 and 1947. 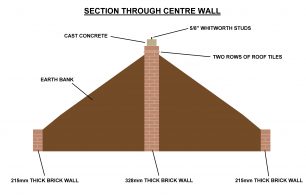 There are several metal rings set into the ground at various positions inside the pens. These would have been used as anchor points for tying down the aircraft. 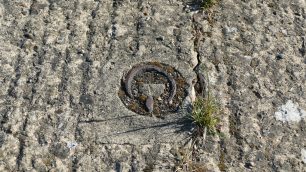 The thickness of the concrete roof/ceiling above the doorways is another noticeable difference between the pens. For example, on pen 11 it is a simple 220mm thick rectangular slab, referred to here as a single-element lintel. Other pens have 2-element lintels, consisting of the slab-type base with an additional cast concrete angled section above. And finally, the 3-element lintel with a further vertical cast concrete section creating an overall height of 800mm. The additional height would have allowed for a thicker layer of earth banking above the internal shelter than that on pen 11 today. 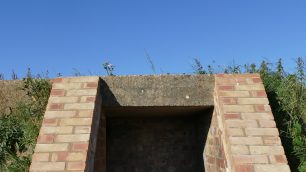 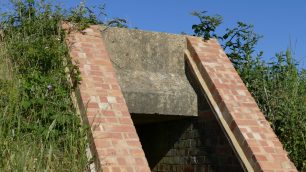 It is unknown whether the pens originally had the lintels they now have or were modified at a later time. Pen 3 is the oddity that makes me question this as it has single-element lintels at the front, but the taller 3-element lintel at the rear.

Three of the pens had rectangular and/or circular concrete constructions on the top of the side/rear arms. 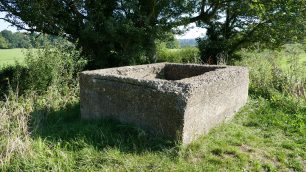 These would have housed anti-aircraft machine guns and the swivel mount for one of these can still be clearly seen inside the structure on pen 5. 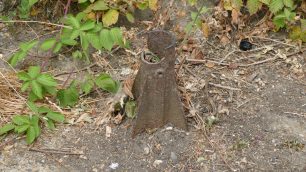 Each pen had a concrete “pathway” to each side which contained a series of metal rings. It is unsure as to the purpose of these, although a fixing for some form of camouflage netting seems to be the current thinking.

There are a series of threaded studs fitted into the concrete capping sections along the top of the centre arm and both outer arms, so maybe the camouflage netting was fixed to these. If so, there would have been some form of post or pole fitted to the studs as the netting would have needed to be much higher to clear any aircraft in the pens. A Hawker Hurricane, for instance, was 3.99m high, whereas blast pen 11 is only 2.3m high. No photographic evidence showing netting has been discovered. 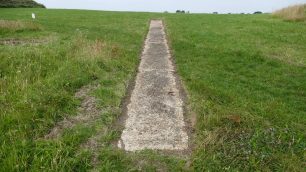 I have tried to create drawings of the pens and have attached two of them here. 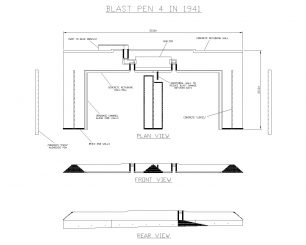 The drawing above shows pen 4 as I believe it would have looked in 1941. It has the prism shaped centre wall and, I believe, the correct shape of frontal brickwork on all three walls. It also has the taller concrete door lintels and a largest rear concrete retaining wall with access ramp. 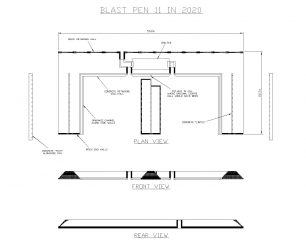 The drawing above shows pen 2 as it appeared in 2020. The entire centre wall was reconstructed in 2017 and the side wall frontal brickwork was reconstructed in the 1990s. All three front walls are historically inaccurate. It also has the lower slab type concrete door lintels and a simple rear brick wall.