You are here: Home>History>Timeline of RAF Kenley>1917-1930>RAF Kenley and the General Strike.

RAF Kenley and the General Strike.

At 2pm on the 3rd May, 1926, Kenley’s Station Commander addressed all airmen on their duties for the period of the General Strike, which had been called by the Trades Union Congress, in support of hard-pressed coal miners, whose wages had been drastically reduced, while profits were maintained by mine owners. 1.7 million workers came out in support, mostly from transport and heavy industry. However, the government was ready with plans to maintain essential services and Kenley was to play a pivotal role in delivering official mail until the crisis had passed. 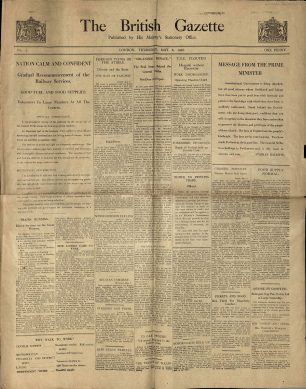 “The British Gazette,” a short lived government publication, issued during the General Strike. Kenley’s pilots were responsible for distributing this Paper around the country, along with all other official correspondence.

No.24 squadron had the responsibility of dispatching the documents and letters of the Crown, by air and road, during the nationL emergency.  The final arrangements of the routes were drawn up by Squadron Leader O’Neill, with the job of driving up to Whitehall, to collect and deliver the mail, being allocated to Flying Officer Lamprey.

Mail flights across the country commenced on the 4th, but weren’t without mishap and there were frequent forced landings due to mechanical failures and poor weather. Low cloud nearly caused disaster on the 6th for Flying Officer Hattersley, who eventually landed at Kenley without incident, despite being unable to spot the ground flares burning on the aerodrome. Pilot Officer Schofield’s engine cover blew off and jammed his rudder. He managed a forced landing at Sutton, Surrey and escaped unscathed, eventually arriving at Kenley the following day.

On 8th May, the Squadron received orders to bring five large Vickers Vimy’s out of storage and prepare them for flight. This was duly done, and, the following day, all five had been tested in the air and refuelled with 300 gallons each, though it is not recorded whether they were eventually put to use. In fact, it seems that when the correspondence on the Spittlegate run was too heavy, on 12th May, an extra DH9a was sent, flown by F/Lt. Woollard, though he had to land at Hendon due to a defective petrol pump.

The flights continued successfully and the squadron received a congratulatory message from Air Commodore Samson for their exemplary work. At 1.30pm, on the 12th May, the strike was officially declared over, but Kenley’s pilots continued to deliver mail by air until the 17th.

“On the outbreak of the General Strike, I was about to join up as a stoker on a railway locomotive when I was called into the the Air Ministry to organise an air communication service throughout Great Britain for official letters and the official newspaper, the British Gazette. The squadrons at Kenley, I think, 24 and 32, were used almost exclusively for this purpose. Air Commodore Samson was then still commanding No.6 Group with Headquarters at Kenley and under the stimulus of his drive and example, the air mail service continued to operate successfully even in bad weather and often with heavy loads of mail and papers, and gained the admiration and gratitude of Whitehall.”