You are here: Home>History>Timeline of RAF Kenley>1917-1930>Jones-Williams and Jenkins Fly Non-Stop to India.

S/Ldr. Jones-Williams sketched by Fred May at the Officers' Mess, Kenley.
Tatler, 4/9/1929

Congratulations for Jones-Williams and Jenkins provide an advertising opportunity for Shell Oil, who supplied the fuel for their record-breaking flight.
'The Yorkshire Post,' 27/4/1929 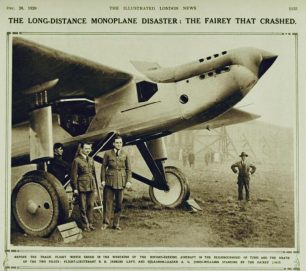 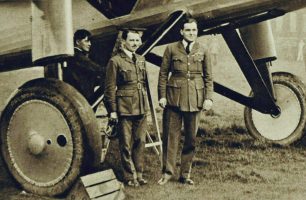 In a little over 50 hours, and 4130 miles later, they arrived in Karachi, failing to beat the world record for long distance flight, (then held by an Italian team) by 336 miles, but becoming the first to fly non-stop from Britain to India.

However, the lure of the world record had not receded and later that year, the intrepid pair made a second attempt – this time with Cape Town, South Africa as their intended destination. They  ran into difficulties soon after crossing the North African coast and crashed in the Atlas mountains of Tunisia on 17th December 1929. Both men were killed.

Despite this tragedy, the Air Ministry ordered a second Fairey monoplane (K1991), which beat the world distance record, with Squadron Leader O. R. Gayford and Flight Lieutenant G. E. NIcholetts at the controls between the 6-8th February 1933. They flew from Cranwell to Walvis Bay, South West Africa – a distance of 5410 miles. Unfortunately, this record only stood for six months before being lost to a French team.

Squadron Leader Arthur Gordon Jones-Williams, Croix de Guerre, MC and Bar was the Commanding Officer of No.23 Squadron, Kenley, at the time of his death, so he is remembered on our online memorial here.

Flight Lieutenant Norman H. Jenkins OBE, DFC, DFM, was born in Liphook, Hampshire, on 24th May, 1895, and educated at Cardiff Secondary School. He joined the Royal Naval Air Service as an air mechanic in 1915, giving his occupation as ‘wireless telegraphist.’

Norman became an observer with the rank of Sub-Lieutenant in 1917, and  after the merger of the R.N.A.S. with the Royal Flying Corps, in April 1918, he served with No.202 Squadron as part of the 61st Wing of the newly-formed R.A.F.

On 27th June, 1918, Jenkins was seriously wounded in action against enemy aircraft, near Middelkerke, while flying as observer to Lieutenant Lionel Arthur Ashfield DFC, in  Airco DH4 (A7868). However, he went on to serve with the RAF on the Rhine and in Iraq. His military decorations were awarded for valuable services in Flanders and on submarine patrol in home waters. Jenkins was a member of 22 Squadron at at the time of his death, aged 34. Air Chief Marshal Sir James Robb also recalled that Jenkins had been a member of No.24 Squadron and had served with him at Kenley during the early 1920’s.

Flight Lieutenant Jenkins’ funeral was held in Ipswich, where he was cremated. Honours were paid by bearer and firing parties with representatives of the High Command of the RAF and Air Minister in attendance.

The Fairey Long Range Monoplane was an experimental aeroplane designed and built in 1928 by Fairey Aviation Company, Ltd., at Hayes, Middlesex, England, for the Royal Air Force, to investigate methods of increasing the range of aeroplanes. The agreed price was £15,000. It was designed for a crew of two pilots and even had a small bed. It had an 82ft wingspan! The wood and fabric wings contained petrol tanks with a capacity of 1043 Imperial gallons. The high-wing monoplane design allowed a gravity feed to the Napier Lion XIA (Special) engine. It produced 530 horsepower at 2,350 r.p.m., and a maximum of 570 horsepower at 2,585 r.p.m., which gave a cruise speed of 110mph and a range in excess of 5000 miles.

This video has some footage of the Gayford/Nicholetts world record flight in 1933.