You are here: Home>History>Timeline of RAF Kenley>1917-1930>Japanese Pioneers Depart from Croydon Aerodrome - 1925 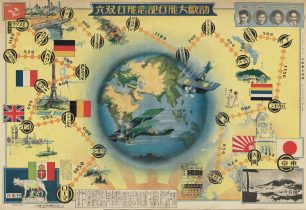 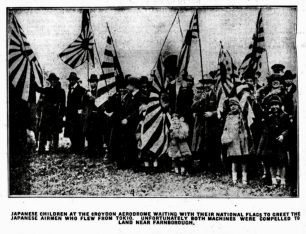 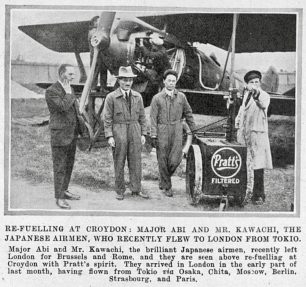 On 19th October, 1925, two Breguet 19 bi-planes took off from Croydon aerodrome flown by four intrepid Japanese airmen on an epic journey from Japan to Europe. Their departure, accompanied by seven aircraft from RAF Kenley, was reported in The Croydon Times on 24th October..

“The four Japanese airmen who reached England last week after flying from Tokyo by way of Siberia and Russia, set out from Croydon Aerodrome on Monday afternoon for Brussels. From the Belgian capital they will fly to Lyons and Rome, where their long flight will come officially to an end.

“A considerable number of their fellow countrymen had assembled at the aerodrome to bid them farewell, and the company included Mr. Yoshida, Charge d’Affaires at the Japanese Embassy and General Nimomiya.

At 11 o’clock seven aeroplanes of the R.A.F. arrived from Kenley to act as an escort of honour, and before departure, two of the British airmen gave a daring and fascinating display of trick flying, which was watched with interest by the Japanese airmen.

“The Japanese machines took off at 1.40pm., and after circling round the aerodrome headed for the Channel. They were followed in the air by the R.A.F. machines. The departing airmen received a hearty round of cheers.

“The Japanese airmen arrived at the Evere aerodrome, Belgium, at 3.55pm., escorted by three Belgian military air squadrons which had gone up to meet them.”

This pioneering trip was sponsored by Asahi Shimbun, one of Japan’s oldest newspapers. They bought the two Breguet 19 aircraft, fitted them with additional fuel tanks and named them Hatsukaze (First Wind) and Kochikaze (East Wind). The pilots were Yusun Abe Hiroshi and Kawachi Kazuhiko and the engineers Shinohara Shunichiro and Katagiri Shohei.

They took off from Tokyo’s Yoyogi Parade Ground on 25th July, 1925, on a route that took them over China and Siberia, visiting Moscow, Berlin, Paris, London and Brussels. They reached Rome on October 27th having travelled more than 10,000 miles in just under 111 hours of flying time.

However, the Paris to Croydon leg of their journey wasn’t without incident.

The two aircraft departed from Le Bourget at midday on 12th October, 1925, but engine trouble compelled them to land at St. Inglevert, France. On the other side of the Channel, two motor coaches full of Japanese supporters had arrived at Croydon around 2pm armed with flags and floral tributes with which to welcome the aviators. However, the afternoon dragged on with no news of their progress. They waited anxiously until 6pm, when they departed with no news of the fate of their countrymen.

At 4.15pm, the two Le Breuget bi-planes had taken to the air once again, but dusk was falling and without the aid of wireless, they ended up off course. Realising they had missed Croydon, they attempted to land. By this time it was completely dark – Major Abe made it to Farnborough safely, but Mr. Kawachi crashed at Cove, roughly a mile away, slightly damaging his propeller and undercarriage. Both crews were thankfully uninjured.

On 13th October, Abe and Kawachi were entertained by the Royal Aero Club and the Society of  British Aircraft Constructors at a welcome luncheon held at the Savoy Hotel, London. Sir Philip Sassoon, Under Secretary for Air, addressed the guests saying:

All who were interested in aviation looked forward to the day when such visits by airmen of far-distant countries would be a usual, if not everyday, occurrence, which would work powerfully for peace and better understanding between nations.

Captain Abe expressed his appreciation of the debt which Japan owed British science. After the luncheon, the airmen, accompanied by the Japanese Charge D’Affaires, went to Whitehall to lay a wreath at the Cenotaph.

October 15th seems to have been the busiest day of official receptions for the Japanese airmen. Their day began with a visit to Vickers, Weybridge, where they toured the workshops and watched demonstration flights of the Vickers Vixen and Viget, both light aircraft. Messers Vickers Ltd. continued their hospitality with a luncheon at Hotel Cecil, presided over by Mr. Douglas Vickers. Guests included Sir Arthur Whitten Brown (transatlantic flight), Sir Quinton Brown (who flew London to Cape Town), and Flying Officer Plenderleith (MacLaren World Flight).
That evening they were entertained by the Air Ministry who held a dinner in their honour at The Gardening Club, Wembley, attended by the Secretary of State for Air, Sir Samuel Hoare, and the Japanese Charge D’Affaires, Mr. Yoshida, as well as the Duke of Sutherland. Afterwards, they attended the Military Tattoo at Wembley Stadium, then only a couple of years old.

The Japanese airmens’ sojourn in London was supposed to end on 17th October, but unfavourable weather delayed their departure until 19th.

No.32 Squadron and No.24 (Communications) Squadron were resident at RAF Kenley during 1925, so it is likely that the honour of escorting the departure of the Japanese airmen fell to them. However, we have yet to establish the aircraft that accompanied the two Breguet bi-planes or the identities of the two pilots who gave an aerobatic display.