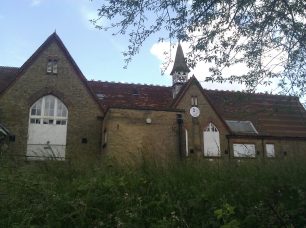 The former Caterham Board School building, taken in 2011.
Tony Rispoli

My starting primary school in my mind coincided with what Rob Wilton the comedian called “the day war broke out” adding “my wife said to me, Rob what are you doing to win this war”.

I was at the Board School In Caterham Valley as the phoney war began.  I recall being told to shelter under the school desk if the wailing siren was heard and then to walk in line quickly across the road to I think one of three so-called underground shelters at top end of the school playing field.  These were just concrete large pipes with earth piled on exposed tops.  And we had to practice donning our gas masks and to carry those masks all the time. Later, at my GrandMother’s, we were taught how to use a stirrup pump to put out an incendiary bomb.  Seemed more like a game!

At night we went through our hedge into the nearest shelter. It had bunks but we mostly sat up; sometimes singing “Run Rabbit Run”, Roll Out the Barrel” and “There’ll Always be an England.

Before the end of 1939, My Mother and Aunt took me and my cousin Shirley off to Rhyl in North Wales as evacuees. I hated the mainly Welsh speaking school there and made myself sick each morning to dodge the school.  But Rhyl being across from Liverpool seemed a poor choice.  So my Mother and I returned to Caterham and me to the Board School as the South East seemed quiet. We could not have appreciated that Hitler and Goering, having promised the German public the Luftwaffe would prevent bombing of the Homeland held off attacking London fearing that would push Churchill into reprisal raids on near Germany. So we were in place in what later was called Hell Fire Alley between Kenley, Biggin Hill and Croydon airfields as the Battle of Britain began.

I can still see Spitfires and Hurricanes swooping along Caterham Valley and German planes trying to avoid chasing British fighters.  At night we could from the shelter hear the pom-pom of anti-aircraft guns, the droning of many planes presumably German bombers, and lots of explosive noises we thought.  And yet emerging after the all-clear siren nothing much seemed to have changed.  But August 16th and 18th were different.  When we got out of the shelter we could see plumes of smoke in three directions – Kenley, Croydon and Biggin Hill.

A policeman was billeted with us and he came back from Kenley with most of his trousers blown off and cuts on his hands and face. He told us he had been in a phone box with brown paper over its windows trying to report in when blast from a bomb blew the glass inwards and oddly to his shock tore off his nether clothes. He was very shaken.  Later we learned that Kenley was an operations centre and an empty butchers shop opposite the British Restaurant along Caterham Valley Road was the stand-by control room as it was above the main telephone line to Air Marshalls Downing’s and Park’s HQs.

Later, as London became a target, I can recall seeing the London Docklands on fire reflected red in the clouds to the north.

So thereafter I got moved around (evacuated) many times’ putting up with 9 changes of school during the war. My Father stayed in the area settling in a flat in Old Coulsdon to which I returned every so often.  Our Caterham house was requisitioned for I think Canadians as was Ewbank House on Kenley Lane as the Canadian Officers Mess and HQ. My Mother had worked at Ewbank in her late teens and we owned a Mowlems house on the site in the 1960s.  My Father Brian Pelling was throughout the war Head of Light Rescue based in the Boys Club in Chipstead. He had a mixed crew using his building skills to dig victims out of damaged structures from aircraft bombing, doodle bug and V2 attacks. My Aunt’s house in Guy Road Croydon was completely destroyed by a V1 Doodle Bug when they were in the air raid shelter!

As an afterthought I recalled that the airmen at Kenley invited the local ladies to regular dances somewhere on site. My Mother went once with her two sisters in law and others but my Father drew the line at “once is enough”.  Later, when the US forces came, as an 9 year old twice I was stopped by a GI (got any gum chum?) and asked to deliver a note to a house on the next road to the lady of the home…

The Guards Depot was centre of much activity and I would see Churchill being driven past from our Coulsdon Road flat over a greengrocers shop and once he gave me a wave.  He just had a motorcycle outrider and a black car following.  Also, the two Princesses were a few times driven past I guess on their way to a photo op as so-called motor mechanics.  On D Day at my Mothers insistence I took flasks of chocolate drink to US troops sat in trenches on Coulsdon Common by the Guards Depot.