You are here: Home>Archive>Documents>"Unexpected Sightings" by Tony Harding 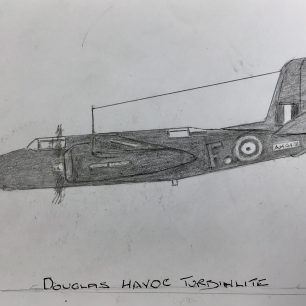 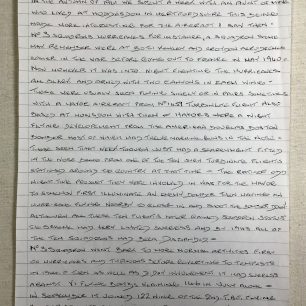 An article by the late Tony Harding, a member of RAFA Kenley and Caterham Branch, about No.3 Squadron’s involvement in the use of Turbinlite equipped Douglas Havocs to assist in night fighting.

In the Autumn of 1941 we spent a week with an Aunt of mine who lived at Hoddesdon in Hertfordshire this being made more interesting for the aircraft I saw then. No. 3 Squadron Hurricanes for instance, a Squadron some may remember were at both Kenley and Croydon aerodromes earlier in the War before going out to France in May 1940. Now however it was into night fighting the Hurricanes all black and armed with two cannons in each wing. These were usually seen flying singly in pairs sometimes with a Havoc aircraft from no. 145 Turbinlite flight also based at Hunsdon with them. Havocs were a night flying development from the American Douglas Boston bomber most of which had twelve machine guns in the nose. Those seen that week though just had a searchlight fitted in the nose being from one of the ten such Turbinlite flights stationed around the country at that time. The rather odd night project they were involved in was for the Havoc to somehow first illuminate an enemy bomber then having a Hurricane flying nearby to close in and shoot the bomber down! Although all these ten flights later gained Squadron status the scheme had very limited success and by 1943 all of the ten Squadrons had been disbanded.
No. 3 Squadron went back to more normal activities first on Hurricanes and Typhoons before converting to Tempests in 1944. Then as well as D-Day involvement it had success against V1 flying bombs claiming 146 in July alone. In September it joined 122 Wing of the 2nd TAF flying bomber escorts and standing patrols until VE Day.