"The Lanc's Visit" by Tony Harding 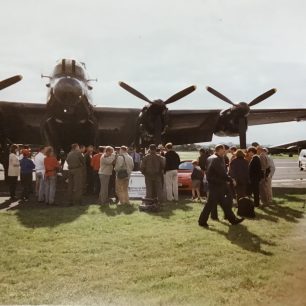 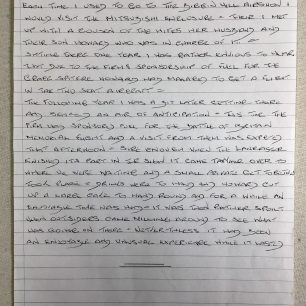 An article about the Lancaster bomber of the Battle of Britain Memorial Flight visiting Biggin Hill, written by the late Tony Harding, who was a member of RAFA Kenley and Caterham Branch.

Each time I used to go to the Biggin Hill Airshow I would visit the Mitsubishi enclosure. There I met up with a cousin of the Wifes, her Husband and their Son Howard who was in charge of it.
Sitting there one year I was rather envious to hear that due to the firms sponsorship for the Grace Spitfire Howard had managed to get a flight in the two seat aircraft.
The following year I was a bit later getting there and sensed an air of anticipation. This time the firm had sponsored fuel for the Battle of Britain Memorial Flight and a visit from them was expected that afternoon. Sure enough when the Lancaster finished its part in the show it came taxying over to where we were waiting and a small private get together took place. Drinks were to hand and Howard cut up a large cake to hand round and for a while an enjoyable time was had. It was then rather spoilt when outsiders came milling around to see what was going on there. Nevertheless it had been an enjoyable and unusual experience while it lasted