You are here: Home>Keywords>Canadian/Canada>Photo of Sgt. William Johnstone Kinnaird 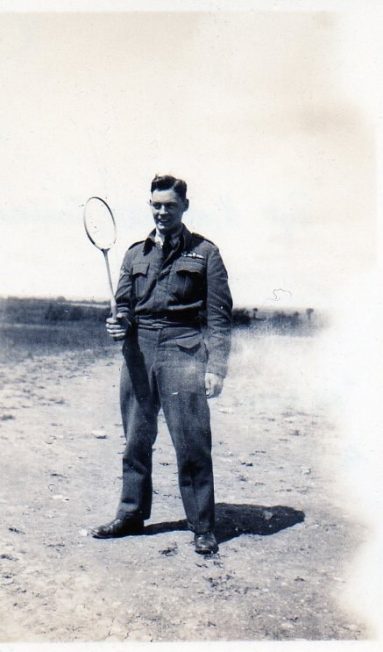 Many thanks to Clive Taylor for this photo of Sgt. William Johnstone Kinnard, who lost his life while based at RAF Redhill, flying with Kenley’s Canadian Wing in April, 1943.

“My Father knew Sgt. (then) Kinnaird when they were both training at 53 OTU RAF Llandow and RAF Rhoose. I first came across him when I was sorting through some photos of my late Fathers and one struck me because of the legend written on the back; – ‘Sgt. Kinnaird Canada France and back in a Spit 1’. At the time I thought not a lot of it, except ‘what a wonderful photo'”.

The comment on the back of the photo probably relates to this incident mentioned in Kinnaird’s service file, which took place on 7th June, 1942:

“Sgt Kinnaird, a pupil pilot of No.18 course, flying Spitfire, crossed the Channel and found himself over Cherbourg peninsula. Flying north, he passed over Quinville and was fired on by a motor vessel which he then attacked. He, in turn, found himself attacked by four radial engined enemy aircraft, when he closed in to 500 yards firing a 2 second burst. The enemy aircraft then split up, two of them swinging in behind him, and he then headed for the clouds so evading the pursuing enemy aircraft.”

He lost his life while based at RAF Redhill, on 1st April, 1943. He had flown over to France alone, in Spitfire Vb, EP177 looking for targets of opportunity on the ground.

From the Squadron Operations Record Book:

“F/Sgt. W.J. Kinnaird, who obtained the W/C Flying’s permission to do a solo Rhubarb, went out on a Rhubarb alone Carentan area, between Cherbourg and Bayeux at 06.26 hours and did not return. We are all hoping for the best but nothing was heard from him and a search was organised consisting of P/O Myers, P/O MacLachlan, P/O Cook and P/O Rogers who searched within 15 miles of the French coast but nothing was seen. F/Sgt. Kinnaird will be missed by the Squadron. He was a keen, fearless type, having thirteen damaged trains to his credit.”

William was the son of George David Kenneth and Margaret E. Kinnaird, of Edmonton, Alberta. He was laid to rest in Bayeux War Cemetery, grave reference, XXIX. K. 3.