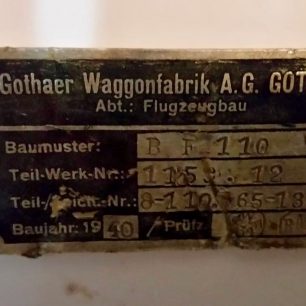 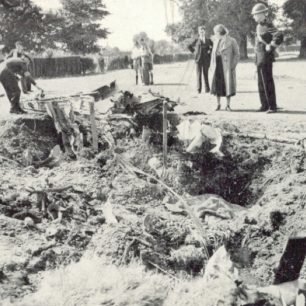 On the morning of 6th September, 1940, the 3rd Staffel of Zerstoerergeschwader 26 were escorting ErproGr./210 on a bombing raid. Messerschmitt Bf 110C-4, Werke/Nr.2146, Code: U8 + CL, was attacked and shot down by Hurricanes, possibly from No.111 squadron. It crashed at Cannons Hill Golf Course, near Coulsdon, at 9.30am. The photograph shows a factory data plate recovered from this aircraft.

Local schoolboy, Derrick Smith, was on his way to Purley County School, Old Coulsdon when he witnessed the crash:

“One morning as we climbed the unmade road from Lodge Lane to Old Coulsdon we heard the crescendo whine of a plane coming down and looked up in time to see a Messerschmidt 110, a twin-engined fighter-bomber, diving vertically at tremendous speed out of the cloud above us. It disappeared behind the trees and as we ran in that direction we heard the explosion and presently saw a plume of black smoke. The plane had nose-dived into the ground behind a house on the edge of Coulsdon golf course and there was little to see by the time we got there: a shallow crater of fresh earth in the green grass, a few lumps of twisted machinery,  a great many small pieces of metal and fabric scattered everywhere and a pervading oily smoky smell. We had not seen any parachutes descending and presumably the two-man crew had perished. There was no way of knowing.”

Unteroffizier Egon Neuss, the wireless operator, had been wounded in the hand and baled out at low level. He was captured and taken prisoner of war.

BBC People’s War Archive. Article ID A2337716. Contributed on 24 February 2004 by Derrick Smith. WW2 People’s War is an online archive of wartime memories contributed by members of the public and gathered by the BBC. The archive can be found at bbc.co.uk/ww2peopleswar

Battle of Britain, Then and Now, by Winston G. Ramsey.