You are here: Home>Archive>Documents>"Lancaster Memories and "Tailless Mossies" by Tony Harding 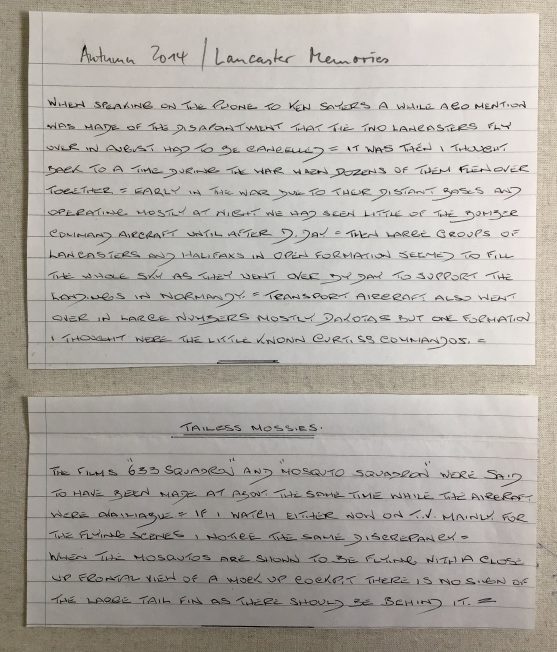 Autumn 2014
When speaking on the phone to Ken Sayers a while ago mention was made of the disappointment that the two Lancasters fly-over in August had to be cancelled. It was then I thought back to a time during the War when dozens of them flew over together. Early in the War due to their distant bases and operating mostly at night we had seen little of the Bomber Command aircraft until after D-Day. Then large groups of Lancaster and Halifax in open formation seemed to fill the whole sky as they went over by day to support the landings in Normandy. Transport aircraft also went over in large numbers mostly Dakotas but one formation I thought were the little known Curtiss Commandos.

The films ‘633 Squadron’ and ‘Mosquito Squadron’ were said to have been made at about the same time while the aircraft were available. If I watch either now on TV mainly for the flying scenes I notice the same discrepancy. When the Mosquitos are shown to be flying with a close-up frontal view of a mock-up cockpit there is no sign of the large tail fin as there should be behind it.