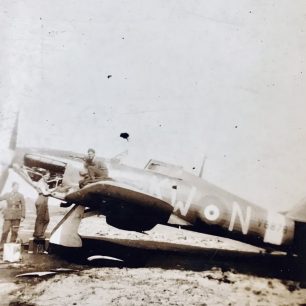 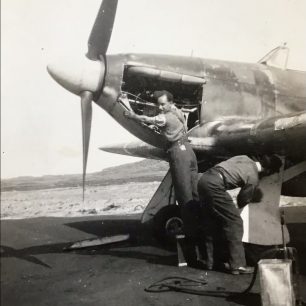 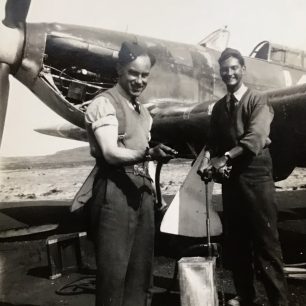 Stan Ford and a fellow 'erk' horsing around for the camera in front of Hurricane Mk.I, V6878, at RAF Valley. Spring 1941.
Walter James "Bill" Tyrrell via Allan Tyrrell

We are very grateful to Allan Tyrrell for these photos of Hurricane Mk.I V6878, coded KW-N, at RAF Valley, Anglesey, from the collection of his Father, Walter James “Bill” Tyrrell, one of 615 Squadron’s Riggers. They were taken between April and June 1941.

Stan Ford, engine fitter, is much in evidence in these photos, hard at work  with his shirt sleeves rolled up under a sleeveless pullover, which may indicate that the photos were taken towards the end of 615’s sojourn on Anglesey. Free French pilot, Rene Mouchotte recalled in his diary that the mountains still showed traces of snow when the squadron arrived in April. He disliked Valley’s bitter wind and found it “cold and comfortless.”

However, the weather was the least of 615’s worries. 258 Squadron had taken their place at RAF Kenley and the two squadrons also exchanged aircraft. 258 received 615’s Mk.II Hurricanes and 615 were re-equipped with 258’s old Mk.I’s – “ancient war horses” according to Mouchotte and he wasn’t far wrong. V6878 had previously been on strength with 249 Squadron during their time at North Weald. On 16th October, 1940, the squadron took off at 11.35am to patrol Hornchurch, followed five minutes later by Wing Commander Victor Beamish. F/O Keith Lofts (flying V6878) and Sgt. Bouquillard left the formation to attack a lone Dornier Do215, but Lofts had to make a forced landing near Tenterden, with a bullet hole in his oil system. They claimed the Do215 as a “probable,” but V6878 was out of action for repairs.

Mouchotte confessed to his diary that:

The planes they have given us are in a deplorable condition. The propellers are peeling, there is play on the controls, the sand covers everything, dries up the oil, gets into the engine. Despite all this the machines must fly, which is something of a miracle.

Under the care of erks like Stan and Bill, V6878 stayed airborne through 34 operational sorties, mostly convoy patrols, during its time with 615 Squadron, and was flown by at least a dozen pilots, among them Mouchotte, Lafont, Strickland and Hone.
This venerable old warbird wasn’t struck off charge until 17th July, 1944, having seen service with Squadrons 249, 308, 615, 59 Operational Training Unit, 318, 56 Operational Training Unit and 2 Tactical Exercise Unit.