You are here: Home>Archive>Documents>"Gordon's War" by Tony Harding 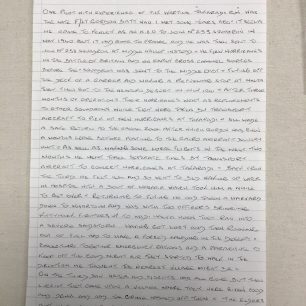 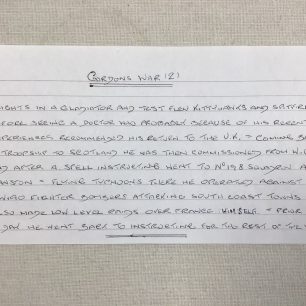 This article about F/Lt. Gordon Batt was written by the late Tony Harding, who was a member of RAFA Kenley and Caterham Branch.

One Pilot with experience of the wartime ‘Takaradi run’ was the late F/Lt Gordon Batt who I met some years ago. It seems he came to Kenley as an NCO to join no. 253 Squadron in May 1940 but it had gone to France and he was then sent to join no. 258 Squadron at Middle Wallop instead. He flew Hurricanes in the Battle of Britain and on early cross- channel sorties before the Squadron was sent to the Middle East. Flying off the deck of a Carrier and making a refuelling stop at Malta they then got to the Western Desert in July 1941. After three months of operations their Hurricanes went as replacements to other Squadrons while they were taken by transport aircraft to pick up new Hurricanes at Takaradi. All made a safe return to the canal zone after which Gordon was given a months leave before posting to the Cairo aircraft delivery unit. As well as making some local flights in the next two months he went three separate times by transport aircraft to collect Hurricanes at Takaradi. Back from the third he felt ill and so went to bed waking up later in hospital with a bout of Malaria which took him a while to get over. Returning to flying he had taken a Harvard down to Khartoum and was with two officers bringing Kittyhawk fighters up to Wadi Halfa when they ran in to a severe sandstorm. Having got lost then running out of fuel had to make a forced landing in the desert. Collecting together emergency rations and a parachute to keep off the cold night air they started to walk in the direction he thought the nearest village might be. On the third day water and biscuits had all gone but then luckily they came upon a village where they were given food and drink and had the grime washed off them. The Elders got in touch with Local Authorities who arranged transport for the three of them to Cairo. Gordon then flew a few Met flights in a Gladiator and test flew Kittyhawks and Spitfires before seeing a Doctor who probably because of his recent experiences recommended his return to the UK. Coming back in a Troopship to Scotland he was then commissioned from WO and after a spell instructing went to no. 198 Squadron at Manston. Flying Typhoons there he operated against the FW190 Fighter Bombers attacking South Coast Towns and also made low level raids over France himself. Prior to ‘D-Day’ he went back to instructing for the rest of the War.