You are here: Home>Keywords>Spitfire>"Fighter Firepower" by Tony Harding 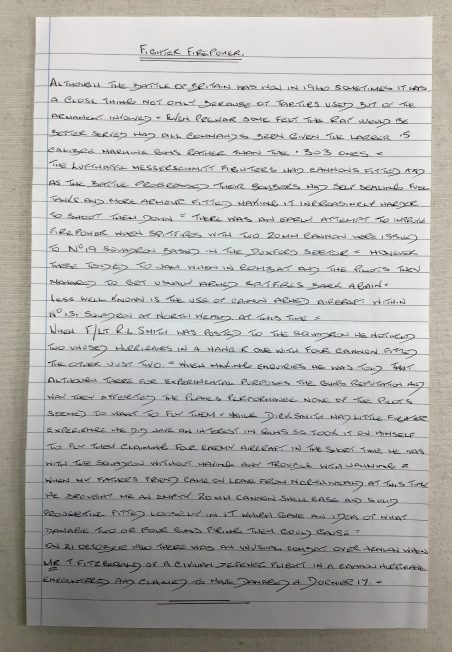 This article about early cannon-armed Spitfires, was written by the late Tony Harding, who was a member of RAFA Kenley and Caterham Branch.

Although the Battle of Britain was won in 1940 sometimes it was a close thing not only because of tactics used but of the armament used. Even prewar some felt that the RAF would be better served had all commands been given the larger .5 calibre machine guns rather than the .303 ones. The Luftwaffe Messerschmitt fighters had cannons fitted and as the battle progressed their bombers had self sealing fuel tanks and more armour fitted making it increasingly harder to shoot them down. There was an early attempt to improve firepower when Spitfires with two 20mm cannon were issued to No. 19 Squadron based in the Duxford sector. However these tended to jam when in combat and the pilots then managed to get usually armed Spitfires back again. Less well known is the use of cannon armed aircraft within No. 151 Squadron at Northweald at this time.
When F/Lt R L Smith was posted to the Squadron he noticed two unused Hurricanes in a hanger, one with four cannon fitted, the other just two. When making enquiries he was told that although there for experimental purposes the guns reputation and way they affected the planes performance none of the pilots seemed to want to fly them. While Dick Smith had little fighter experience he did have an interest in guns so he took it on himself to fly them claiming four enemy aircraft in the short time he was with the Squadron without having any trouble with jamming. When my Fathers’ friend came on leave from Northweald at this time he brought me an empty 20mm shell case and solid projectile fitted loosely in it which gave an idea of what damage two or four guns firing them could cause. On 21 October 1940 there was an unusual combat over Henlow when Mr T Fitzgerald of a civilian defence flight in a cannon Hurricane encountered and claimed to have damaged a Dornier 17.