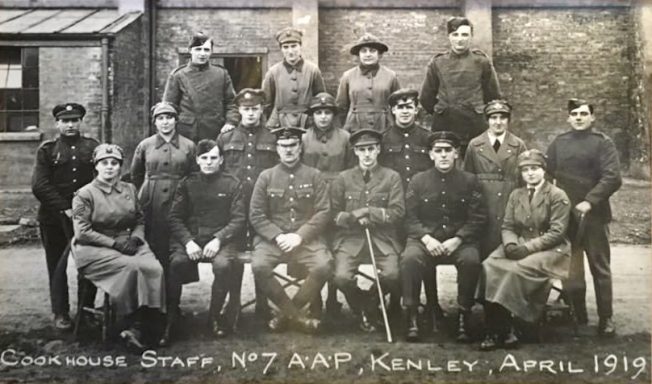 A great photo of the Cookhouse staff at Kenley during 1919, when it was still No.7 Air Acceptance Park.

Many thanks to The Wattenden Arms for allowing us to add this photo which hangs on the wall in the pub!

Sadly, we don’t know anything about these men and women, but we do know that the original cookhouse and dining room stood on the eastern side of what is now Victor Beamish Ave, before it was demolished and replaced by the larger building now in use as a school, a bit further north.

Air Acceptance Parks were set up so that aircraft components could be assembled, have their guns and instrumentation calibrated and be test flown before being ferried across the Channel to the Squadrons at the Front.

Kenley would have been a hive of activity at this time, so the cookhouse staff would have been kept busy. Even once hostilities ceased, there were still building works continuing on the airfield, and Communications Squadrons ferrying dignitaries and paperwork to the Paris Peace Conference.