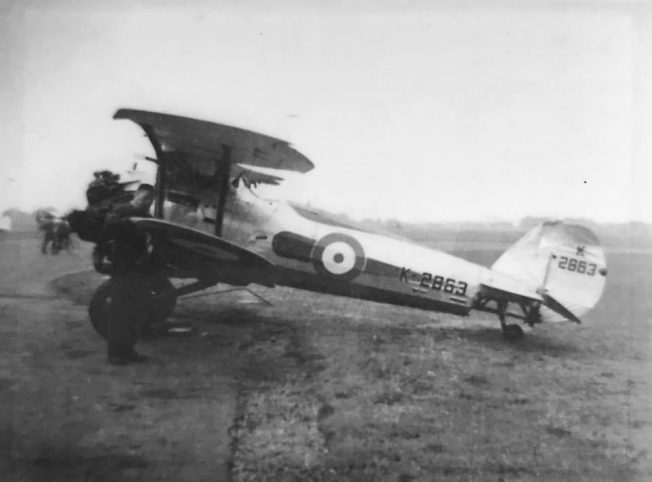 This photo of Bristol Bulldog Mk.IIa, K2863, of No.3 Squadron belonged to Geoff Tait and has come to us courtesy of Robin Grainger.

It’s days in the air ended on 20th July, 1937, when it appears that No.3 squadron lost two Bristol Bulldog MkIIa’s in separate landing accidents! K2863 was being flown by P/O D’A Lister on an air test, prior to being sent to Ternhill when it overshot on landing, braked and was damaged beyond repair. K2859 “crashed”!! There were no fatalities.

No.3 squadron heard that they were to be re-equipped with Gloster Gladiators in November 1936, but the first one didn’t arrive until four months later. On 10th May, 1937, nine of their Bristol Bulldogs were flown to the Storage Unit at Waddington and the squadron used Gladiators for the air display at Hendon in June.

On 8th July, 1937, Gladiators of No.3 Squadron reached 25,000ft and their flight ceiling was lifted, although, “some experienced coughing and rythmic thumping and momentary engine failure” at that altitude!

Many thanks to Tony Adams for additional information from No.3 Squadron’s Operations Record Book.