You are here: Home>Archive>Documents>"A Squadron Error" and "Memories of 1940" by Tony Harding

"A Squadron Error" and "Memories of 1940" by Tony Harding 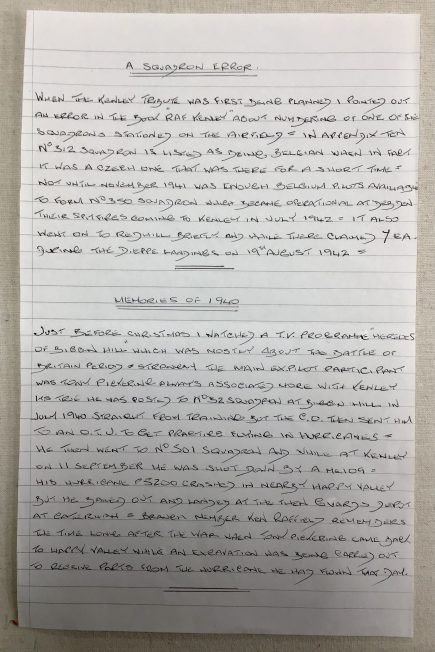 Two articles by the late Tony Harding, a member of RAFA Kenley and Caterham Branch.
“Squadron Error” corrects an error in the book RAF Kenley by Peter Flint.
“Memories of 1940” is a out Tony Pickering, who flew with No.501 Squadron at RAF Kenley.

When the Kenley Tribute was first being planned I pointed out an error in the book ‘RAF Kenley’ about numbering of one of the Squadrons stationed on the airfield. In Appendix ten no. 312 Squadron is listed as being Belgian when in fact it was a Czech one that was there for a short time. Not until November 1941 was enough Belgium Pilots available to form no. 350 Squadron which became operational at Debden their Spitfires coming to Kenley in July 1942. It also went on to Redhill briefly and while there claimed 7 EA during the Dieppe Landings on 19th August 1942.

Just before Christmas I watched a TV programme ‘Heroes of Biggin Hill’ which was mostly about the Battle of Britain period. Strangely the main ex Pilot participant was Tony Pickering always associated more with Kenley. It’s true he was posted to no. 32 Squadron at Biggin Hill in July 1940 straight from training but the CO then sent him to an OTU to get practice flying in Hurricanes. He then went to no. 501 Squadron and while at Kenley on 11th September he was shot down by a ME109. His Hurricane P5200 crashed in nearby Happy Valley but he bailed out and landed at the then Guards Depot at Caterham. Branch Member Ken Raffield remembers the time long after the War when Tony Pickering came back to Happy Valley while an excavation was being carried out to receive parts from the Hurricane he had flown that day.