You are here: Home>Keywords>Bader>"A Bader Myth?" by Tony Harding

"A Bader Myth?" by Tony Harding 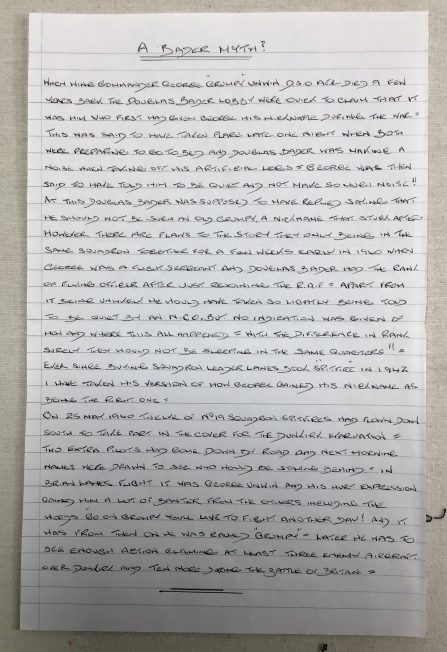 This article about how Wing Commander George Unwin DSO, AFC, acquired the nickname ‘Grumpy,’ was written by the late Tony Harding, who was a member of the Royal Air Force Association, Kenley and Caterham Branch.

When Wing Commander George ‘Grumpy’ Unwin DSO AFC died a few years back the Douglas Bader lobby were quick to claim that it was him who first had given George his nickname during the war. This was said to have taken place late one night when both were preparing to go to bed and Douglas Bader was making a noise when taking off his artificial legs. George was then said to have told him to be quiet and not make so much noise!! At this Douglas Bader was supposed to have replied that he should not be such an old grumpy, a nickname that stuck after. However there are flaws to the story they only being in the same squadron together for a few weeks early in 1940 when George was a Flight Sergeant and Douglas Bader had the rank of Flying Officer after just rejoining the RAF. Apart from it being unlikely he would have taken so lightly being told to be quiet by an NCO. But no indication was given of how and where this all happened. With the difference in rank surely they would not be sleeping in the same Quarters!! Ever since buying Squadron Leader Lanes book ‘Spitfire’ in 1942 I have taken his version of how George gained his nickname as being the right one.

On 25 May 1940 twelve of no. 19 Squadron Spitfires had flown down South to take part in the cover for the Dunkirk evacuation. Two extra pilots had come down by road and next morning names were drawn to see who would be staying behind. In Brian Lanes flight it was George Unwin and his hurt expression gained him a lot of banter from the others including the words ’go on grumpy you’ll live to fight another day !’. And it was from then on that he was called ’grumpy’. Later he was to see enough action claiming at least three enemy aircraft over Dunkirk and ten more during the Battle of Britain.