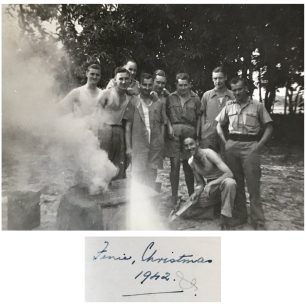 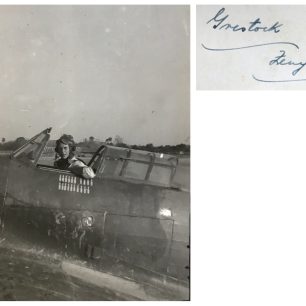 Dennis Jack Grestock, in the cockpit of a Hawker Hurricane, RAF Feni, 1942. He is wearing a white shirt, so the photo might have been taken the same day as the other photo of him on this page.
Walter James "Bill" Tyrrell via Allan Tyrrell 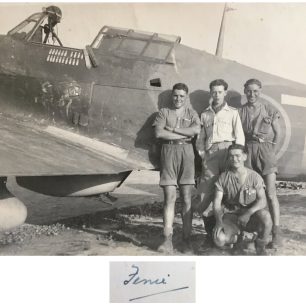 Dennis Jack Grestock (standing centre) probably with his ground crew. Bill Tyrrell, rigger, standing right. The Hurricane is the same one shown in the other photo of Grestock.
Walter James "Bill" Tyrrell via Allan Tyrrell

These photos comes from the family of Walter James “Bill” Tyrrell, one of 615 Squadron’s riggers, who had been with the Squadron since the Battle of Britain.

“Feni – Christmas 1942,” with Bill Tyrrell standing second left. The camaraderie between the men in the photo is obvious, but so too is the strain and discomfort.

By Christmas 1942, the war had taken 615 (County of Surrey) Squadron far away from their original pre-war base at Kenley.

Since their arrival in India, six months earlier, they had spent a relatively quiet time at RAF Jessore in Bengal during the monsoon. A few weeks before Christmas they moved to RAF Feni, just north of the Burmese border, in preparation for more offensive action. This came in the shape of strafing sorties and escort duties for bombers. The Japanese hit back against Feni with a bombing raid on 16th December and 615’s operations continued up to and including Christmas Day (16 sorties amounting to over 17 hours of operational flying on 25th December).

Christmas Day once again and with it comes as much celebration as is possible under existing circumstances. Did we have beer? You should have looked in for a moment at the airmens’, sergeants’ or officers’ mess for verification. The officers and sergeants helped to serve up a “wizard” dinner to the airmen and afterwards – well we’ll leave that part to your imagination. It was strange weather for Christmas Day – blue skies, sunshine and terrific heat at midday…..This evening the Squadron received a cable from our Hon. Air Commodore, Mr. Churchill. The message read,“Please give all ranks my best wishes for Christmas and New Year. Happy landings in 1943.”

615 Squadron remained at RAF Feni until 6th May, 1943, when they moved to Alipore, Bengal.

Bill’s other two photos taken at RAF Feni show Dennis Jack Grestock posing in the cockpit of his Hawker Hurricane and with a group of ‘erks, probably his ground crew. Bill Tyrrell is standing to the right of the group photo.

Dennis Jack Grestock was born in Wandsworth, London, on 20th May, 1920, the son of Philip Grestock and Florry Gertrude Grestock, nee Lucas. He worked as a Marine Insurance clerk before he enlisting in the RAF Volunteer Reserve.
Dennis died on active service on 31st December, 1943, aged 23, in the rank of Flying Officer.  His death isn’t mentioned in the 615 Squadron operations record books, so it may have been as the result of an accident or natural causes during the Squadron’s time at RAF Dohazari. He was laid to rest in Chittagong War Cemetery, Chattogram, Bangladesh. Grave Ref: 1.D.5. Florry was a widow by the time of her son’s death, so she must have written the touching inscription on Dennis’s headstone:

In sweet memory of my dear son, to the world but one, to me, the world.

Rest in peace Dennis and thank you for your service.

Many thanks to Allan Tyrrell.