You are here: Home>Keywords>Hurricane>253 Squadron at RAF Northolt 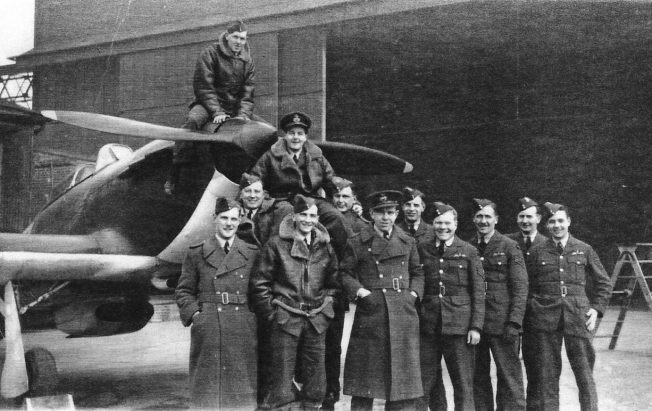 We’re very grateful to Andy Long for this wonderful photo taken by the late Flight Lieutenant John Greenwood of 253 Squadron.

While not taken at Kenley, it shows B Flight of 253 Squadron at Northolt prior to their partcipation in the Battle of France, and some of the pilots who later did fly from Kenley, four of whom lost their lives and are featured in our memorial pages.

Atop the Hurricane is P/O David Jenkins, who was killed on 30th August 1940; sat on the shoulders of two pilots is P/O Allan Corkett who was with 253 until August 1941, and survived the war. The two pilots holding up are P/O Charles G. St. David Jeffries ( on left ), and P/O John Clifton ( on right ) who was KIA on the 1st September 1940.

Front row from left: P/O Peter Dawbarn who was posted to 17 Squadron prior to the Battle of Britain, then P/O Leonard Murch who flew with 253 until joining 185 Squadron on Malta. He was killed on 16th September 1943, flying PR sorties with 680 Squadron. Next is F/Lt Anderson and Sgt. Gilbert MacKenzie, both killed in the Battle of France, and the last named one is Sgt Marsh ( third from right ) no further information is available on him, though he does look rather like Sgt James Marsh who was killed serving with 238 Squadron on 13th August 1940.

Andy Long (some relatives of the pilots also have this photo).